Size750mL Proof113.6 (56.8% ABV)
Chattanooga Whiskey 1816 Cask is an award-winning unfiltered barrel proof high rye bourbon, created by selecting barrels aged between 2 and 10 years from the hottest and driest portions of the rick house.
Notify me when this product is back in stock. 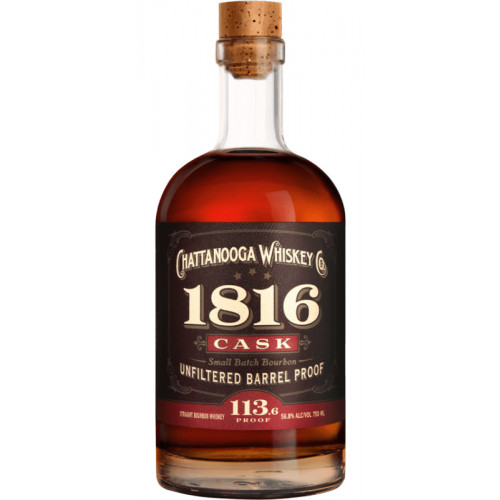 Chattanooga Whiskey was founded by Tim Piersant and Joe Ledbetter in 2011. Inspired by the city's rich distilling history, the two went on a mission to bring back “Whiskey to the People” and Hamilton County, and did not shy away from the battle to change the laws of their state in its pursuit. In March 2015, the company’s Experimental Distillery opened in the heart of downtown Chattanooga, which keeps over 100 different barrels in its aging cellar. In 2015, they released the first whiskey produced in Chattanooga in 100 years, Chattanooga Whiskey “100”, and began crafting their malt-forward style of straight bourbon whiskey, Tennessee High Malt, which was released in August 2019, marking a new era in the company history. In March 2017, the company opened its second distillery in downtown Chattanooga, the Riverfront Distillery, transforming a historic car dealership into one of the largest craft bourbon distilleries in the South, with a dunnage-style heated barrel house with room to age more than 4,500 barrels of whiskey. This is where the distillers make their signature Tennessee high malt.

Chattanooga Whiskey 1816 Cask is an unfiltered barrel proof high rye bourbon, created by selecting barrels from the hottest and driest portions of the rick house. These barrels, aged between 2 and 10 years, are not only higher proof, but exhibit a bolder, sweeter, spicier, more barrel-forward character. Richness is preserved by omitting a traditional filtration step and bottling at 113.6 proof.

The fruity nose with distinct notes of baking spices is followed by sweet apple, toffee pudding and a bit of smoke on the palate. Spiciness emerges on the finish.