Size750mL Proof100 (50% ABV)
Charles Goodnight Kentucky Straight Bourbon is aged for roughly six years and bottled at a robust 100 proof.
Notify me when this product is back in stock. 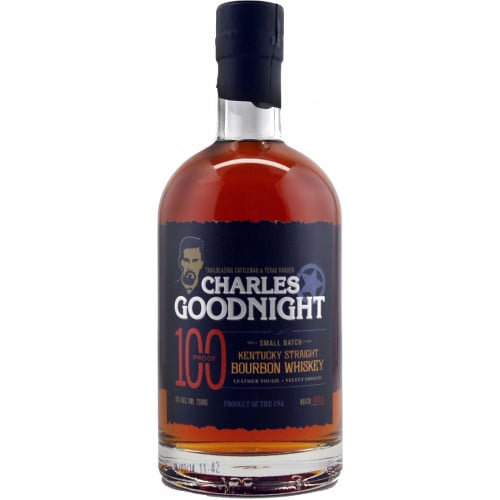 William "Bill" Foley II, the great-great-nephew of Texas Ranger, cattle herder and "father of the Texas Panhandle" Charles Goodnight, has followed in his pioneering uncle's footsteps. A consummate entrepreneur, Foley is the ex-chairman of a Fortune 500 company, owner of a working cattle ranch and golf resort in Montana and founder of Foley Family Wines, where he began his foray into the wine and spirits industry.

Taking full advantage of his creativity and connections (Foley spoke at length with Wild Turkey to find the perfect recipe for his whiskey), Foley has been working tirelessly over the past several years preparing to launch his newest product: Charles Goodnight Kentucky Straight Bourbon, a nod to his late ancestor.

Charles Goodnight Kentucky Straight Bourbon is aged for roughly six years and bottled at a robust 100 proof. "My great-great-uncle was a tough guy and a big bourbon drinker," says Foley. "He wouldn't have wanted an 80-proof bourbon."

Charles Goodnight Kentucky Straight Bourbon has rich aromas of oak and vanilla, leading to honey, birthday cake and cinnamon spice on the palate. The finish is long and smooth, accented with more oak and leather, reflective of Goodnight's own, "tough as leather, smooth as velvet," mantra.

Released just now in a small handful of states across the country, Caskers is offering the chance to buy Charles Goodnight Straight Bourbon for the first time ever. Pick up a bottle today before it sells out!

Rich aromas of oak and vanilla, leading to honey, birthday cake and cinnamon spice on the palate. Finish is long and smooth, accented with more oak and leather.