Size700mL Proof95.2 (47.6% ABV)
Distilled in 1988 at the historic Lowland Cambus distillery, this whisky was finished in Octave casks that previously held Glen Elgin and Linkwood. The single hogshead yielded a scant 280 bottles, making for a beautifully aged and rare dram.
Notify me when this product is back in stock. 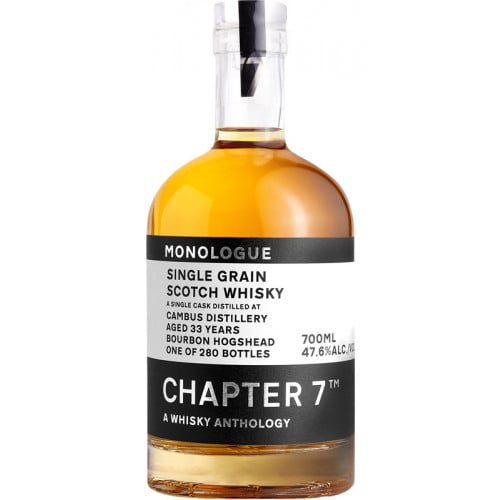 Monologue #25 comes from Cambus, a historic Lowland distillery that started distilling malt in 1806. Distilled in 1988, Chapter 7 finished the well-aged whisky in Octave casks that previously held Glen Elgin and Linkwood. A single hogshead of the whisky was produced, yielding a total of just 280 bottles. This 33-year-old Scotch was bottled in 2021 at 95.2 proof.

Get your bottle of this exceptional rare whisky today!

The nose opens with walnut, sugarcane, coconut, tobacco, prickly pear, and banana aromas. The palate is citrusy and oaky with lemon curd, angelica, oak, baking spice, and a pleasant sweetness throughout. Look for vanilla, tobacco, citrus, and raisin notes on the lingering finish.