Size750mL Proof93.4 (46.7% ABV)
The newest expression in the Bladnoch's single-malt array is also the owner David Prior's 'favorite Bladnoch yet'. Now that's saying a lot.
Notify me when this product is back in stock. 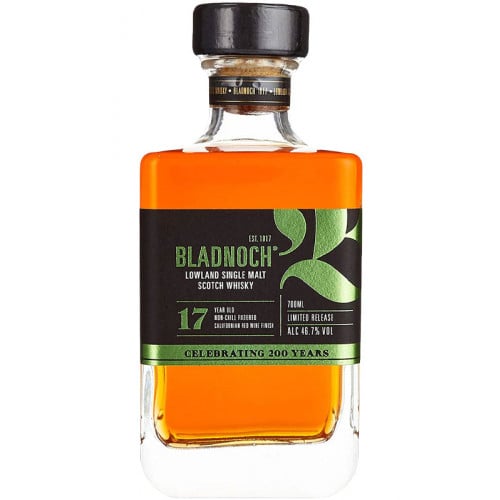 The Bladnoch 17-Years-Old Lowland Single Malt Scotch Whisky is a limited-edition dram made with local barley and pristine water from the Bladnoch River. This hand-crafted, non-chill filtered delicacy is bottled at a pleasant 46.7% ABV. In 2002 the juice in question entered the ex-bourbon barrels. Then, one part was refilled in ex Californian red wine casks in March 2017 and another in January 2017. The blend, honey, is a silky smooth dram you have to try.

Situated on the banks of the River Bladnoch, in Scotland's Lowlands, Bladnoch stands out as Scotland's southernmost distillery. A quaint distillery, Bladnoch uses just one pair of stills, creating whiskies known for their signature light/delicate character, highly sought after by connoisseurs. They source the water from the Bladnoch River. The whiskey production is overseen by Master Distiller Dr. Nick Savage, formerly of The Macallan.
Explore all Bladnoch bottles >>

The expression sports a fruity nose, while the palate serves hints of oak and marmalade. The finish is malty, according to the producer.