Learn more
Size750mL Proof102.4 (51.2% ABV) *Please note that the ABV of this bottle may vary
Having spent 31 years in its first-fill bourbon barrel, this Speysider is the oldest Chapter 7 bottling yet. Distilled in 1990 at the Tormore distillery, only 239 bottles of the precious 102.4-proof liquid came from that single cask.
Notify me when this product is back in stock. 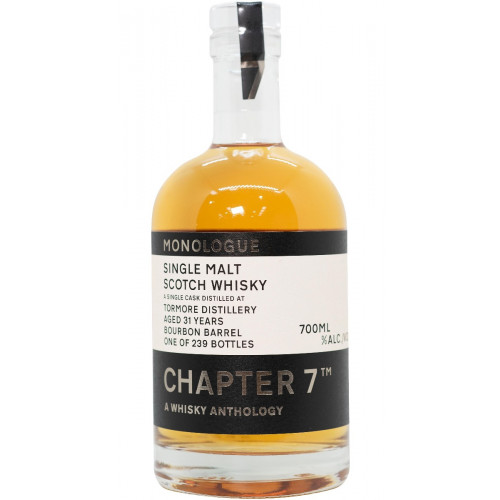 Chapter 7 has three series of expressions: Monologue, Anecdote, and Chronicle. The first are unique single casks, the second once-in-a-lifetime small batches or married atypical whiskies, the third has their aging reserves. This release is the 15th in the Monologue series. Distilled in 1990 at the Tormore distillery, it's a mature Speyside whisky at 31 years of age ― the oldest release from Chapter 7 yet. A part of the Chivas Brothers portfolio, Tormore single malt bottlings were few and far between. This is the second bottling of a Tormore single malt by Chapter 7, the first being a 17-year-old that received a Liquid Gold Award from the Whiskey Bible. Matured in a first-fill bourbon barrel that yielded 239 bottles, the expression was bottled at 102.4 proof.

Grab a bottle of the oldest single malt that Chapter 7 has bottled!

The nose of this mature whisky has barley, apple, prune, mango, honey, as well as floral and nutty touches. It's mineral and fruity on the palate with grapefruit, rhubarb, barley, and wood. The finish is grassy and waxy with lingering fruit notes.