Size700mL Proof104 (52% ABV)
Today, most of Blair Athol Highland single malt is matured in ex-bourbon casks to be used in Diageo's blends. This rare find is a single cask of 12-year-old whisky that was aged in a (presumably) 2nd or 3rd fill wine cask that yielded a total of 258 bottles of the complex and fruity Scotch. 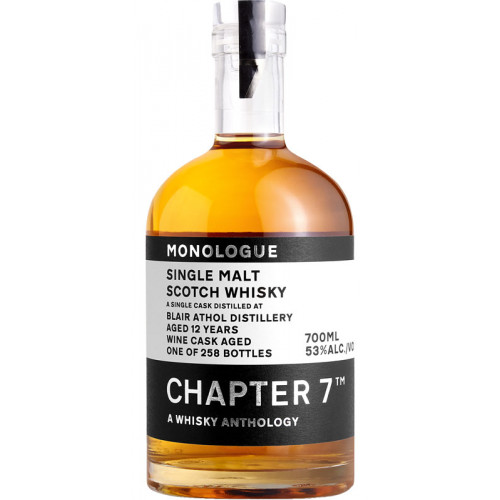 Monologue #22 is a single-cask Highland single malt that comes from Blair Athol, one of Diageo's workhorse distilleries. Built in 1798 in Pitchlory, a lot of the whisky ends up in Bell's Blended Scotch. Mostly matured in ex-bourbon casks, it's rare to find a Blair Athol that was aged in a wine cask. This cask was just that ― presumably a 2nd or 3rd fill one. Bottled in 2021 without chill-filtration or added coloring, it's a deliciously complex 106-proof single malt. 258 bottles were produced.

Grab your bottle of this fruity 12-year-old whisky today!

Fruity and complex, you'll find aromas of honey, fruit syrup, and brown sugar on the nose followed by a burst of fruit in the form of apple, pear, peach, apricot, and kiwi notes. The palate has cereal, canned fruit, citrus zest, and chalk notes that culminate in a complex finish with vanilla, coffee, and cream.