Size750mL Proof80 (40% ABV)
Made from a mash of 80% rye and 20% malted barley, this whiskey is infused with raw, wildflower honey.
Notify me when this product is back in stock. 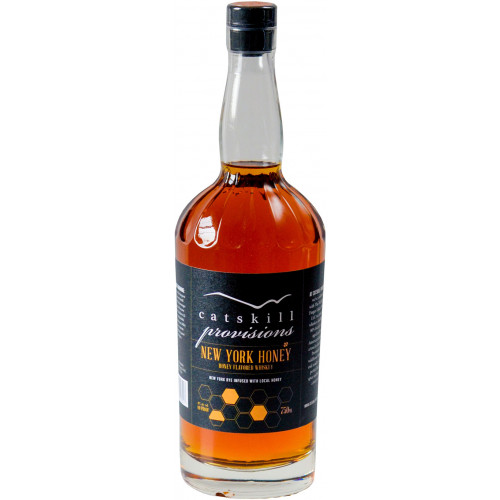 Surrounded by the grapevines of nearly 40 different wineries, Finger Lakes Distilling is situated high atop Seneca Lake in upstate New York's wine country. The architecture of the 5,000 square foot distillery, which is complete with a 15-foot-tall canoe-shaped chandelier made using reclaimed lumber, was inspired by some of Scotland's most prestigious distilleries. Inside the distillery, Brian and Thomas McKenzie — Finger Lakes' founders — are inspecting the holding tanks which store the grains used to make Catskill Provisions New York Honey Whiskey.

New York Honey Whiskey is made from a mash of 80% rye and 20% malted barley, which the McKenzies source from within a 50-mile radius of their distillery. After purchasing the raw, whole grains from local farmers (they store them in holding tanks that they've nicknamed Rye-ella and Malt-ilda), the grains are milled and mashed without using any commercial enzymes. Then, the wash is distilled through a two-ton copper pot still that traveled 4,000 miles from Markdorf, Germany to upstate New York.

This infusion of rye and honey leads to a unique flavor profile — the whiskey has a warm, spicy aroma that gives way to notes of sweet citrus, mellow honey and wildflowers on the palate. The finish is warm and bold, with a touch of ginger and oak.

Warm, spicy aroma that gives way to notes of sweet citrus, mellow honey and wildflowers on the palate. Finish is warm and bold, with a touch of ginger and oak.