Size750mL Proof90 (45% ABV)
This is a limited high-end release from Cascade Hollow Distilling, which famously produces George Dickel. A small batch blend, crafted from less than 20 barrels that were filled right after the distillery reopened in 2003.
Notify me when this product is back in stock. 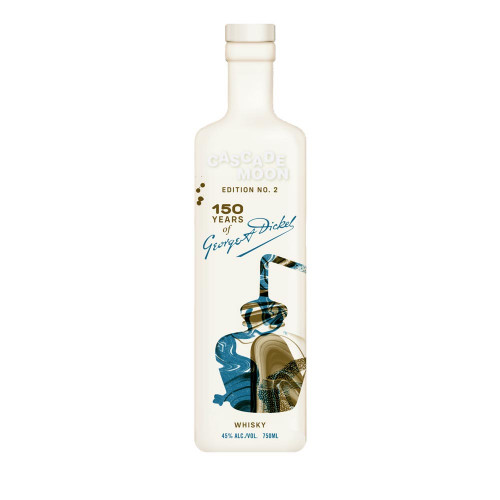 About Cascade Moon Whisky Edition No. 2

Cascade Moon Editions is a new premium label of higher end whiskies, made at the Cascade Hollow Distilling Co., which famously produces George Dickel. The distillery was previously named George Dickel distillery after George A. Dickel who was born in a rural town in eastern Tennessee. By 1867, Dickel was an established Nashville merchant but moved his family to the city of Tullahoma (situated in south-central Tennessee), where he purchased the Cascade Hollow Distillery. After working tirelessly at the distillery, Dickel declared that his spirits were of equal quality to the finest scotch, and followed in the Scottish tradition of spelling whisky without an "e".

While George A. Dickel Distillery was forced to close its doors as a result of Prohibition, it was rebuilt in 1958 by Master Distiller Ralph Dupps. To ensure the whisky's authenticity, Dupps obtained the original manuscripts in which Dickel detailed his unique recipe and distillation processes. The distillery was closed again in the 1990s due to the supply of George Dickel exceeding the demand – this allowed the value of whisky to rebound and the distillery reopened its doors again in 2003. Today, the distillery is owned by Diageo.

Cascade Moon Whisky Edition No. 2 is made from the first barrel of Tennessee whisky that was filled right after the distillery reopened in 2003. This is a small batch blend, crafted from less than 20 barrels. Made from a mash bill of 84% corn, 10% rye, and 6% malted barley, it was aged for 17 years in new charred oak before being bottled at 90 proof. This limited release offers an enticing nose with caramel, spices, vanilla, and oak, that develop into a complex medium-bodied palate with savory flavors and more spices.

Get your Cascade Moon Whisky Edition No. 2 today!

The nose is enticing, greeting with aromas of caramel, spices, vanilla, and oak. The palate is complex and medium-bodied with savory flavors, more spices, char, cereal, tobacco and leather notes. The finish is complex and smooth.