Size750mL Proof84 (42% ABV)
This limited-edition release of Tennessee whisky was aged for 11 years in new charred oak. It's a delicate and light whisky that still manages to be flavorsome. Inspired by "the history of Cascade Hollow’s original Cascade Pure Whisky" that used the tagline ‘mellow as moonlight’. 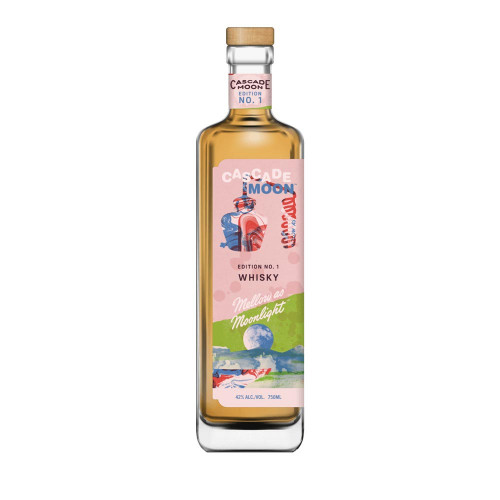 About Cascade Moon Whisky Edition No. 1

Cascade Moon Editions is a new premium label of higher end whiskies, made at the Cascade Hollow Distilling Co., which famously produces George Dickel. The distillery was previously named George Dickel distillery after George A. Dickel who was born in a rural town in eastern Tennessee. By 1867, Dickel was an established Nashville merchant but moved his family to the city of Tullahoma (situated in south-central Tennessee), where he purchased the Cascade Hollow Distillery. After working tirelessly at the distillery, Dickel declared that his spirits were of equal quality to the finest scotch, and followed in the Scottish tradition of spelling whisky without an "e".

While George A. Dickel Distillery was forced to close its doors as a result of Prohibition, it was rebuilt in 1958 by Master Distiller Ralph Dupps. To ensure the whisky's authenticity, Dupps obtained the original manuscripts in which Dickel detailed his unique recipe and distillation processes. The distillery was closed again in the 1990's due to the supply of George Dickel exceeding the demand – this allowed the value of whisky to rebound and the distillery reopened its doors again in 2003. Today, the distillery is owned by Diageo.

Cascade Moon Whisky Edition No. 1 was "inspired by the history of Cascade Hollow’s original Cascade Pure Whisky that used the tagline ‘mellow as moonlight'". Blended by distiller Nicole Austine, this limited-edition release was aged for 11 years in new charred oak. A light whisky with a mash bill of 84% corn, 10% rye, and 6% malted barley, the nose is incredibly soft and fruity with aromas of raspberries, pineapple, and coconut. The palate is gentle as well with a savory grain character and savory notes beautifully balanced by sweet caramel and a touch of spice. Bottled at 84 proof, expect a delicate finish.

Get your Cascade Moon Whisky Edition No. 1 today!

The nose is bright and fruity with aromas of raspberries, pineapple, and coconut. The palate is gentle with a savory grain character and savory notes beautifully balanced by sweet caramel and a touch of spice. The finish is delicate.