Caskers Rewards members earn up to 6 store points back when buying this bottle.
Size750mL Proof120.8 (60.4% ABV)
Part of Diageo’s Special Edition Series, this unpeated Islay whisky received five stars from Difford’s Guide, and was bottled at a remarkable 120.78 proof.
Notify me when this product is back in stock. 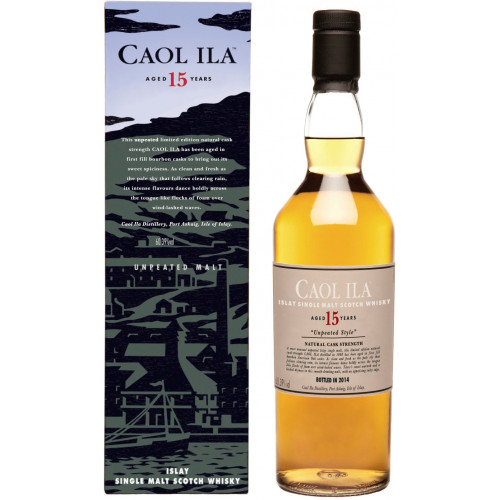 Once the barley has been malted and fermented, it is distilled through Caol Ila's copper-pot stills. "The stills were designed to replicate the original stills installed in the 19th century," says Billy Stitchell, the distillery manager. Stitchell began working at the distillery in 1974, and is the fourth generation of his family to be employed at the distillery — his father, both grandfathers and one great-grandfather all worked at Caol Ila. Unlike other distilleries on Islay (particularly Lagavulin), Caol Ila distills the wash in copper-pot stills that are less full in order to maximize copper contact. As a result, the whisky is less peaty and smoky than traditional Islay whiskies.

Each year, Caol Ila distills a small run of completely unpeated whisky, and in 2014 Caol Ila released a 15 year old unpeated whisky as part of Diageo’s Special Edition Series. The whisky was distilled in 1998 and aged for 15 years in first-fill, ex-bourbon casks before being bottled at a robust 120.78 proof. The absence of peat gives the whisky a subtle aroma of toasted coconut, rum raisin ice cream, white chocolate and freshly baked bread, which leads to a malty palate filled with cereal, marshmallows and almonds. The finish is light and floral, with eucalyptus notes mingling with faint smoke and fruit cake.