Size1075mL Proof90 (45% ABV) - Various
Made using raw, organic Vermont honey, these spirits are a celebration of one farmer's special connection to the land, and this gift pack comes with a jar of that very honey!
Notify me when this product is back in stock. 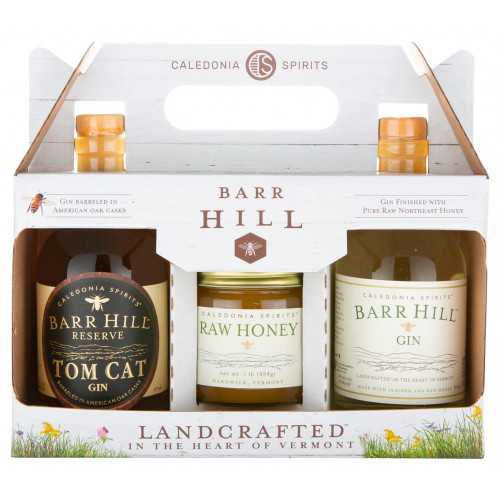 In the early 18th century, the rolling hills of Vermont's landscape were dotted with numerous breweries and micro-distilleries. In 1852, however, yielding to the state's temperance movement, Vermont banned alcohol and shuttered the state's burgeoning craft spirits industry. Though alcohol was legalized again in 1933, Vermont's Prohibition movement cast a long shadow, and distilleries across the state remained dormant for decades. Today, on the banks of the Lamoille River in Hardwick, Vermont, Caledonia Spirits remains rooted in the traditions of sustainability and Vermont's agriculture.

Todd Hardie, Caledonia Spirits founder, spent over four decades as a beekeeper before deciding to incorporate his raw, organic Vermont honey into craft spirits. His first honey house, which required a $1,000 down payment and had a mortgage of $133 per month, was home to 180 colonies. Coincidentally, the land in northern Vermont where he kept his first bee houses straddles the Québec border, and had been the site of a Prohibition-era speakeasy named Bucket of Blood.

The Barr Hill Gin Gift Pack comprises two of their gins as well as a jar of their honey. The award-winning Barr Hill Gin (45% ABV) is a London dry-style gin that, unlike other gins, uses only one botanical during distillation — juniper. The rest of its complex, gentle flavor profile comes from the raw honey (made at one of Hardie's nearly 2,000 colonies), which is added during a second distillation. The second gin in the pack, Tom Cat Reserve Gin (43% ABV), begins its life as Barr Hill Gin. Following distillation, which occurs in a 25-gallon recycled stainless steel still (a testament to Hardie's commitment to environmental sustainability), the gin is matured for three to four months in new American oak casks.

"The best fertilizer is always the footprint of a farmer," Hardie says. These spirits have his footprint all over them, and are now available in a gift pack with a jar of Caledonia Spirits' honey!

Barr Hill Gin: It's a floral nose with clover, alfalfa, and goldenrod. It's round and viscous on the palate with notes of juniper and honey lingering on the finish.

Barr Hill Tom Cat Gin: It's an oaky character with juniper notes. There are touches of caramel, vanilla, and honey.

3.4 out of 5
(1 reviews)
Write a review
Real email address is required to social networks
Sign in
Login with Google
Login with Facebook
Or
We also recommend