Size750mL Proof90 (45% ABV) - Various
This gift pack contains 2 Barr Hill gins that are made with a simple recipe that only calls for 2 botanicals ― juniper berries and their very own honey. Tom Cat Gin is then aged in new American oak. The third addition to the pack is a Barr-Hill-branded enamel tumbler.
Notify me when this product is back in stock. 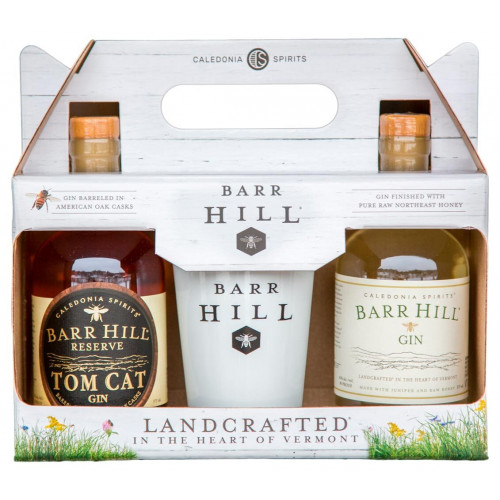 The Barr Hill Gin Gift Pack comprises two of their gins as well as an enamel tumbler with the Barr Hill logo. The award-winning Barr Hill Gin (45% ABV) is a London dry-style gin that, unlike other gins, uses only one botanical during distillation — juniper. The rest of its complex, gentle flavor profile comes from the raw honey (made at one of Hardie's nearly 2,000 colonies), which is added during a second distillation. The second gin in the pack, Tom Cat Reserve Gin (43% ABV), begins its life as Barr Hill Gin. Following distillation, which occurs in a 25-gallon recycled stainless steel still (a testament to Hardie's commitment to environmental sustainability), the gin is matured for three to four months in new American oak casks.

Get this gift pack today!

Barr Hill Gin: It's a floral nose with clover, alfalfa, and goldenrod. It's round and viscous on the palate with notes of juniper and honey lingering on the finish.

Barr Hill Tom Cat Gin: It's an oaky character with juniper notes. There are touches of caramel, vanilla, and honey.