Caskers Rewards members earn up to 9 store points back when buying this bottle.
Size750mL Proof90 (45% ABV)
This single malt whisky was aged for a minimum of 33 years in an American oak cask that was previously used to mature bourbon.
Notify me when this product is back in stock. 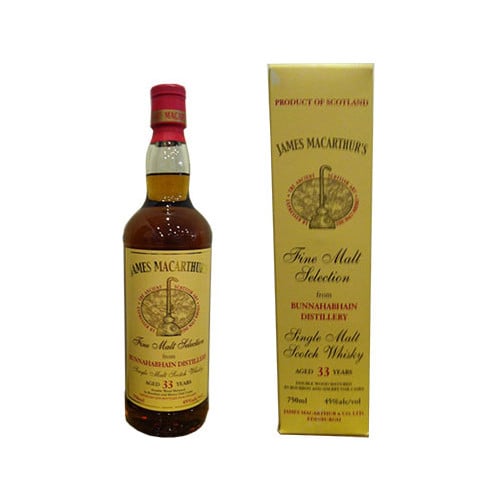 Founded in 1881, Bunnahabhain (pronounced "BOO-na-HAven") Distillery is situated along the banks of the Sound of Islay in the Inner Herbidies archipelago. For over a generation, the distillery was only accessible by sea, and a large port, costing approximately £3,500 pounds at the time, was constructed in order to allow ships to unload barley and yeast near the distillery and load finished casks of whisky ready for sale. While technological improvements have made it easier to get to the distillery over the last century, little has changed in terms of Bunnahabhain distillation process.

Once the barley has been mashed, it is fermented in washbacks made of Oregon Pine for nearly three days. While wooden washbacks are more expensive and difficult to maintain as compared to stainless steel washbacks, they absorb a portion of the heat generated during the fermentation process and thus, create a lighter and more rich whisky. Following fermentation, the wash is distilled twice, first through Bunnahabhain's copper-pot wash still and again through its copper-pot spirit still. Then, the heads and tails of the distillate are removed by Robin Morton, Bunnahabhain's stillman (Morton began working at the distillery in 1978), before the whisky is allowed to mature at Bunnahabhain's warehouse. The sea-facing warehouse, which rests on the banks of the Sound of Islay, enjoys a cool, salty breeze that adds a touch of salt to the whisky as it ages. "Over the years, you get this slight salty taste," says Andrew Brown, Bunnahabhain's distillery manager. "The older the whisky gets, the saltier it becomes. It's not overpowering — it's just a hint."

James MacArthur's Bunnahabhain 33 Year Old Single Malt Scotch Whisky was distilled in 1980 and matured in an American oak cask that was previously used to age bourbon. After a 33 year beauty rest, the whisky was bottled in 2013 at 90 proof without the use of chill filtration or any artificial coloring. The whisky has an aroma of ripe apples, meadow flowers, honey and roasted peanuts. The aroma gives way to notes of milk chocolate, applesauce, vanilla and rich caramel on the palate. The finish is elegant and full, with hints of citrus and ripe, tropical fruits. Only a handful of bottles of this single malt exist. Pick one up today!

Aroma of ripe apples, meadow flowers, honey and roasted peanuts. Notes of milk chocolate, applesauce, vanilla and rich caramel on the palate. Finish is elegant and full, with hints of citrus and ripe, tropical fruits