Caskers Rewards members earn up to 9 store points back when buying this bottle.
Size750mL Proof108.8 (54.4% ABV)
Only 469 bottles of this single malt Scotch whisky, which was matured for 9,974 days, were ever produced.
Notify me when this product is back in stock. 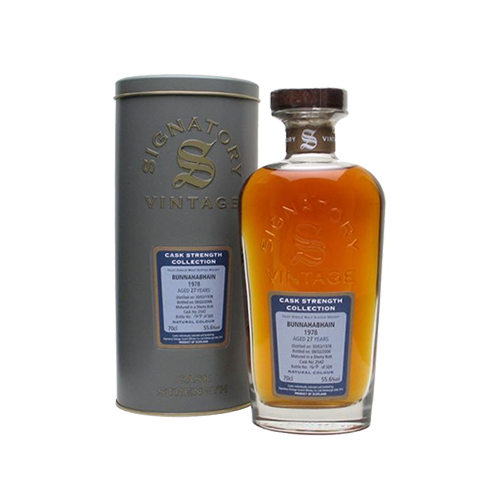 Situated in northeastern Islay, Bunnahabhain (pronounced "BOO-na-Haven") Distillery was founded in 1881 by the Greenless Brothers. At the time, the distillery was accessible only by sea and a large port, costing approximately £3,500 at the time, was the distillery's only connection with the rest of the world. For over a generation, ships would dock at the Port of Bunnahabhain and unload barley and yeast, before departing with finished casks of whisky in their cargo holds. Over a century later, little has changed at Bunnahabhain Distillery.

Today, Bunnahabhain Single Malt Scotch Whisky continues to be made from fresh Optic barley, which is lightly peated to approximately 3 phenol parts per million (in contrast, Leviathan II Whiskey is peated to 110 phenol ppm, while Octomore 5.1 is peated to 169 phenol ppm). Once the barley arrives at the distillery, it is milled and mashed with pure spring water drawn from the Margadale River. The water, which travels through an ancient bed of limestone, is transported by pipeline to the distillery and as a result, avoids travelling through the peatbogs of Islay.

Once the barley has been mashed, it is fermented in washbacks made of Oregon Pine for nearly three days. While wooden washbacks are more expensive and difficult to maintain as compared to stainless steel washbacks, they absorb a portion of the heat generated during the fermentation process and thus, create a lighter and more rich whisky. Following fermentation, the wash is distilled twice, first through Bunnahabhain's copper-pot wash still and again through its copper-pot spirit still. Then, the heads and tails of the distillate are removed by Robin Morton, Bunnahabhain's Stillman (Morton began working at the distillery in 1978), before the whisky is allowed to mature at Bunnahabhain's warehouse. The warehouse, which rests on the banks of the Sound of Islay, enjoys a cool breeze that adds a touch of salty tang to the whisky as it ages. "Over the years, you get this slight salty taste," says Andrew Brown, Bunnahabhain's Distillery Manager. "The older the whisky gets, the saltier it becomes. It's not overpowering — it's just a hint."

Bunnahabhain 27 Year Old Single Malt Scotch Whisky has a copper-reddish hue, along with an aroma of honey, figs and dried apricots. The initial flavors of oak, cinnamon and woody spices settle and give way to notes of caramel, salty biscuits, dried cherries and dark raspberries, and lead to an elegant, smooth finish.

Only 469 bottles of this single malt Scotch whisky have ever been produced. Pick one up today!