Learn more
Size750mL Proof92 (46% ABV) *Please note that the ABV of this bottle may vary
Named in honor of two stray dogs that captivated the city of San Francisco, this gin is distilled from 100% California grapes.
Notify me when this product is back in stock. 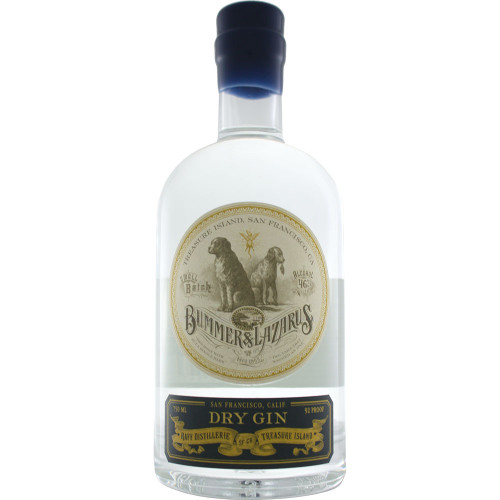 Bummer & Lazarus Gin is made from 100% California grapes, which are distilled into a brandy. "We're looking to produce a unique gin for the market," says Raff, noting that the use of a grape brandy for the backbone of the gin adds a subtle mouthfeel to its flavor. After the brandy has been produced, Raff redistills it with a number of fresh herbs and botanicals including juniper berries, orris root, coriander seed, angelica root, bitter orange peel, lemon peel, cinnamon bark and licorice root.

As a result, Bummer & Lazarus Gin has notes of fresh citrus, particularly orange and lemon, along with subtle hints of earthy minerals and pepper. The clean and crisp finish ends with a soft burst of fresh cinnamon.

In the early 1860s, the State of California was suffering from an epidemic of stray dogs. At the time, dogs were said to outnumber people in the city of Los Angeles by nearly two to one. In San Francisco, however, two stray dogs named Bummer and Lazarus were beloved by the city, and recognized for their unique bond. Bummer, a Newfoundland, made a living by begging for scraps along Montgomery Street. In 1861, he rescued Lazarus from a fight with a larger dog and thereafter, the two dogs became inseparable. Eventually, newspapers and magazines such as the Californian, Daily Alta California, Daily Morning Call and Daily Evening Bulletin began writing stories of the dogs' exploits.

When Lazarus was captured by a dog catcher in 1862, a mob of angry citizens demanded his release and petitioned the city to have the pair declared public property. City supervisors were soon forced to release Lazarus, and declared thereafter that the duo would be exempt from city ordinances against stray dogs. In 1863, Lazarus passed away after being struck in the head by a horse. Emperor Norton, who had proclaimed himself the Emperor of the United States, attended Lazarus' funeral. Two years later, Bummer passed away, and was eulogized by Mark Twain.

"We named our gin Bummer & Lazarus in homage to those two dogs and everything they did for San Francisco," says Carter Raff, the founder of Raff Distillerie. His distillery, situated on Treasure Island, was formerly used as a Navy brig (the distillation equipment can be found in the yard, while the prison cells have been converted into a bottling area).
Explore all Bummer & Lazarus bottles >>

Notes of fresh citrus, particularly orange and lemon, along with subtle hints of earthy minerals and pepper. Clean and crisp finish that ends with a soft burst of fresh cinnamon.