Learn more
Size750mL Proof88 (44% ABV) *Please note that the ABV of this bottle may vary
Barrel-aged for 3-6 months, this gin earned a score of 93 points from the Beverage Tasting Institute.
Notify me when this product is back in stock.

This product is available in: DC, IL, MI, TX, WA Unfortunately, we can't ship to PO Boxes and APO addresses. 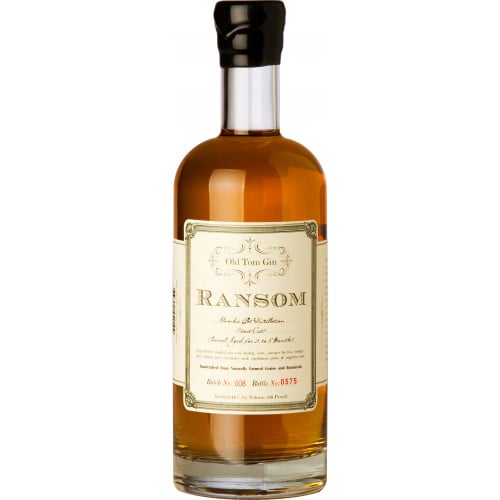 Situated in the foothills of the Cascade Mountains, Ransom Distillery sits on a 40-acre farm just outside Sheridan, Oregon. The distillery, which opened its doors in 1997, was named after the funds required to start the business. "I had always wanted to start my own business," says Tad Seestedt, owner and master distiller at Ransom Spirits, "and I thought that Ransom was an appropriate name in that its definition is buying your freedom or independence with money. The money I had to borrow from the bank to start the business was my Ransom."

Ransom Spirits' Old Tom Gin is a revival of the gins fashioned during the mid-19th century — the golden age of American cocktails. The recipe, which Seestedt developed in collaboration with famed historian and mixologist David Wondrich ("a living iPod of drink lore and recipes," according to The New York Times), actually begins with the distillation of whiskey.

After mashing and fermenting malted barley, Seestedt distills the wash through his custom-designed 150-gallon copper pot still. Next, he infuses a separate grain-based distillate with a secret recipe of herbs and botanicals, including juniper, orange peel, lemon peel, coriander seed, angelica root and cardamom. The malted barley and grain-based distillates are then married together in the chamber of Seestedt's still and then distilled together. After distillation, Old Tom Gin is aged for 3-6 months before being brought to proof and bottled by hand.

Old Tom Gin has initial notes of orange and lemon, which are wonderfully balanced by herbal undertones. The subtle, rounded flavors of the juniper, grains and hint of oak provided by the aging process add complexity and intrigue, and are followed by a malty, slightly sweet finish. Old Tom Gin earned the Gold Medal at the International Review of Spirits Competition and earned a score of 93 points from the Beverage Testing Institute. In addition, it earned a Gold Medal and the title "Best of Category" at the American Distilling Institute Competition in 2013.

Initial burst of citrus, especially orange and lemon, which are balanced by herbal undertones. Subtle, round notes of juniper, coriander and grains followed by a hint of cardamom. Finish is malty and slightly sweet, with a kick of peppercorn.