Size750mL Proof114 (57%ABV)
A navy strength gin with increased amounts of botanicals that are first distilled individually. A gin with a modern twist, it won't get lost in your G&T.
Notify me when this product is back in stock. 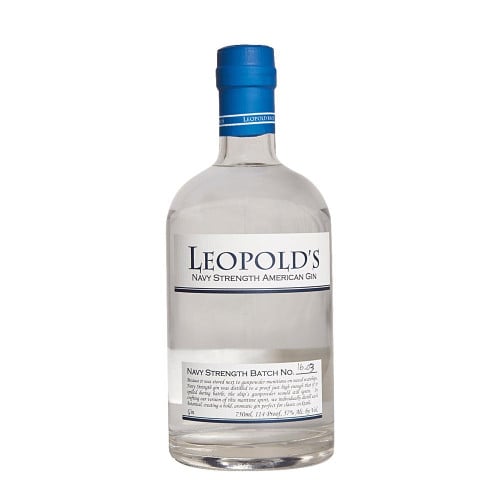 Situated in an industrial complex on the outskirts of Denver, Leopold Bros. Distillery is the brainchild of Todd Leopold. After receiving his diploma in Malting and Brewing from the Siebel Institute in Chicago, Todd moved to Germany and began working at the Doemens School of Brewers and Maltsters in Munich. Then, he apprenticed at four different breweries and distilleries in Germany, before moving to Kentucky to study distilling. In 2008, Todd moved back to his parents' home in Littleton, Colorado and opened the doors to Leopold Bros. Distillery with his brother Scott. Their core collection, ranging from gin, whiskey, vodka, aperitif and even an absinthe vert, has garnered numerous international awards.

While the term is relatively new, the origins of navy strength gin date back to the 18th century when the British Royal Navy supposedly measured the spirit's strength by igniting it. Navy strength gin is thus bottled at exactly 114 proof.

First released in 2012, Leopold's Navy Strength Gin is a gin that won't get lost in your G&T. Made with increased amounts of juniper, coriander and cardamom as well as some other botanicals, such as bergamot, this is a modern twist on navy strength gin. Unlike other gins, all botanical components are distilled individually before being blended together, including juniper and Bergamot. As a result, Leopold's Navy Strength Gin is a bold, aromatic gin that will make any gin-forward cocktail stand out.

The nose is aromatic with aromas of bergamot peel, lavender and cardamom. The palate is bold with spicy juniper and warm coriander. The finish is long and bold. Perfect for a G&T.