Size1750mL Proof90 (45% ABV) each
Bulleit Bourbon has received Excellent, Highly Recommended at the 2017 Ultimate Spirits Challenge, a score of 95 points from Wine Enthusiast, and Forbes Magazine called it "one of the best bourbons". It has won several awards, including the coveted Double Gold medal at the 2016 edition of the San Francisco World Spirits Competition.
Notify me when this product is back in stock. 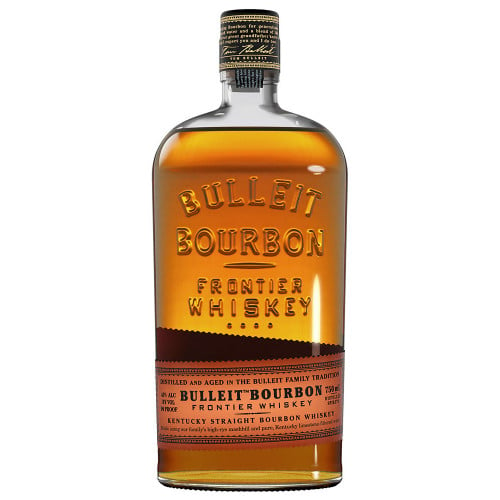 Bulleit Kentucky Straight Bourbon Whiskey is made from pure Kentucky limestone-filtered water and locally sourced ingredients. It is crafted from a mash of corn, rye and malted barley. After the grains are harvested, they are mashed and fermented with a unique strain of family yeast. Following fermentation, the wash is distilled through a copper still before being matured in charred, new American white oak casks.

Bulleit Bourbon has a caramel color, along with an aroma of charred oak, rich caramel and warm spices. The notes of oak, allspice and cinnamon give way to hints of creamy vanilla and rye bread on the palate, and lead to a long, lingering finish.

Bulleit Bourbon has received "Excellent, Highly Recommended" at the 2017 Ultimate Spirits Challenge, a score of 95 points from Wine Enthusiast, and Forbes Magazine called it "one of the best bourbons.". It has won several awards, including the coveted Double Gold medal at the 2016 edition of the San Francisco World Spirits Competition.

"There's a difference between aging and maturity, and we'll never bottle whiskey until it's ready to reach the customer," says Bulleit.

Caramel color with smooth and full body. Aroma of charred oak, rich caramel and warm spices. Notes of oak, allspice and cinnamon give way to hints of creamy vanilla, roasted nuts and rye bread on the palate. Long, lingering finish.