Be the first to review this product
The journey of the Kosher series of whiskey began in 2010 and is seeing the first releases after Passover in 2020. This expression uses the same high-quality grains as Buffalo Trace Bourbon Whiskey and was created in partnership with the Chicago Rabbinical Council.
$149.99
Add to Wish List

Buffalo Trace Kentucky Straight Bourbon Whiskey is made from a mash of yellow #2 dent corn, plump rye grains and malted barley, which is cooked and cooled before being fermented for approximately 3-5 days. Once fermentation is complete, the bourbon is double-distilled through column stills before being aged in first-fill, American oak barrels (90% of the distillery’s oak is brought in from the Ozark Mountains) that have been aged for six months in the distillery’s yard before being heavily charred.

Created in partnership with the Chicago Rabbinical Council, Buffalo Trace Kosher Rye Recipe is a bourbon whiskey in a Kosher version. The partnership began in 2010 and is seeing the release of the first 3 expressions in 2020. Utilizing the same high-quality grains as their Bourbon Whiskey, the spirit is aged in kosher barrels for 7 years, then bottled at 94 proof. Special care is taken to ensure that the whiskey has no contact with non-kosher spirits. The Rye Recipe Bourbon is released yearly after Passover.

The kosher bourbon has an exquisite balance and complex profile with vanilla and molasses on the nose. The palate has a pleasant sweetness to it, along with a spicy kick, brown sugar, toffee, fruit, and oak notes. Finishes smooth and long. 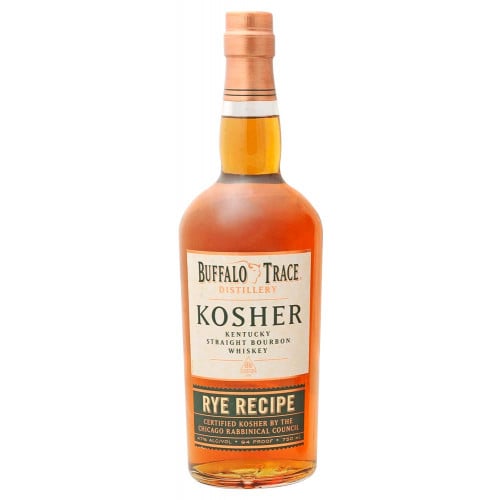