This product is available in: CA, CT, NE, NH Unfortunately, we can't ship to PO Boxes and APO addresses.

Size750mL Proof100 (50% ABV)
Crafted with barley from 7 Islay farmers, this expression was distilled in 2013 and bottled in 2021. First matured for 7 years in ex-American whiskey casks, 25% of the spirit was then transferred into first-fill Pessac-Leognan French wine casks, before being married together.
Notify me when this product is back in stock.

This product is available in: CA, CT, NE, NH Unfortunately, we can't ship to PO Boxes and APO addresses. 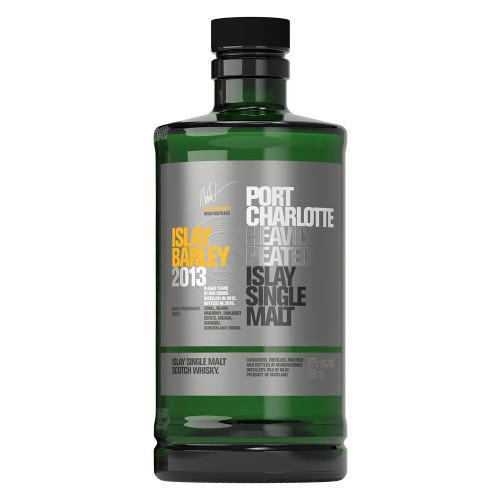 Distilled in 2013 and bottled in 2021, this Bruichladdich Port Charlotte Islay Barley was distilled with barley from 7 Islay farmers: Hunter Jackson at Cruach, Ian Mckerrell as Island Farm, Raymond Fletcher at Dunlossit Estate, Donald and Andrew Jones at Coull, Mark French at Rockside, Alastair Torrance at Mulindry, and Raymond Stewart at Sunderland. The whisky was matured in ex-American whiskey barrels for 7 years. 25% of the whisky was then transferred into first-fill Pessac-Leognan French wine casks. The whiskies were finally married together into this 8-year-old, 100-proof expression. Peated and complex (due to what the Islay barley brings to the table), it's a traditional Islay dram, filled with character.

Get your bottle of this Islay whisky today!

Floral aromas lead the charge on the nose, followed by orange zest, earthy peat, malty, and fruity notes, as well as oak. It's briny on the palate with complex oak, a touch of almonds, coconut, caramel, vanilla, and brown sugar, balanced with peat smoke. The finish features the same delicate balance of smoke, fruit, oak, and floral notes.