Size750mL Proof124.2 (62.1% ABV)
This is a "single field, single vintage, single malt". The 5-year-old true terroir whisky was distilled in 2015 with Islay barley from a single field ― the Church Field on Octomore Farm, which lies just 2 miles from the distillery. 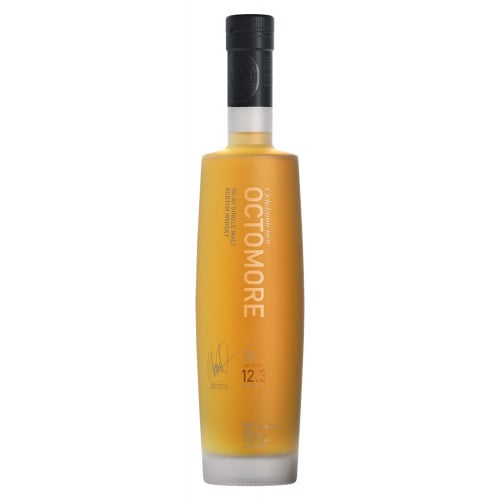 Octomore 12.3 is a true terroir whisky. You see, the Islay barley was grown by farmer James Brown in 2014 in a single field ― the Church Field on Octomore Farm. It was slowly and patiently distilled in 2015 through their tall, narrow-necked stills a mere 2 miles from the field itself. 75% of the whisky then went into ex-American whiskey casks, the rest into Pedro Ximenez solera casks, sourced from bodega Fernando de Castilla in Jerez, France. Both whiskies were combined after 5 years of maturation, resulting in a combination of Bruichladdich's characteristic briny and citrusy notes with the sweet dried fruit of PX.

Get your bottle of this true terroir whisky today!

The nose opens with sherry notes with dates, figs, and raisins, along with plenty of peat. Citrus, honey, floral, and orange notes follow, along with toffee, vanilla, tobacco, and smoked seaweed. The palate is peppery with dark chocolate, earthy smoke, and dried fruit notes. The pleasantly sweet palate culminates in a smoky finish with charcoal, soot, dried fruit, as well as a touch of chocolate and lemon.