Size750mL Proof118.8 (59.4% ABV)
Distilled from 100% Scottish barley in 2014, this expression has spent 5 years in first-fill American oak ex-bourbon casks. It might be a peat bomb, but it's expertly balanced by vanilla sweetness as well as delicate floral and fruity notes.

Have a private virtual tasting masterclass with Head Distiller Adam Hannett, the master behind the legendary Bruichladdich series. Register for Bruichladdich’s masterclasses here!
Notify me when this product is back in stock. 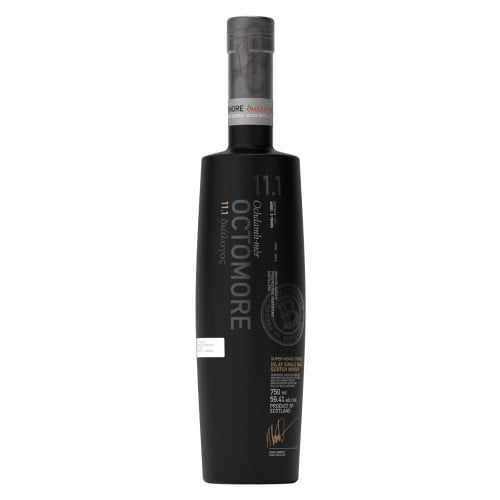 Both Octomore 11.1 and 11.3 are malted to an extremely high 100+ PPM. What sets them apart is the barley character from different regions. The 11.1 was crafted with 100% Scottish concerto and propino barley. Distilled in 2014, it then spent 5 years in first-fill American oak ex-bourbon casks from Jim Beam, Heaven Hill, and Jack Daniels. Super-heavily peated, yet delicately balanced with the sweetness and vanilla of the barrels and delicate floral and fruity notes, it's a complex and powerful Islay spirit that is bottled at 118.8 proof and limited to 30,000 bottles.

Lemon, grassy, earthy, and brine notes lead the charge on the nose, followed by rubbery, medicinal peat smoke. Honey, malt, and green fruit follow. The palate has brown sugar, some heat, stone fruit, vanilla, toasted oak, and toffee. The mineral earthiness and citrus give way to plenty of bonfire and tar smoke on the finish with lingering honey, vanilla, and spice.