Size750mL Proof127 (63.5 ABV)
Distilled from Scottish barley in 2016, this Octomore 10.4 is the youngest ever released, aged for 3 years in Virgin Oak.
Notify me when this product is back in stock. 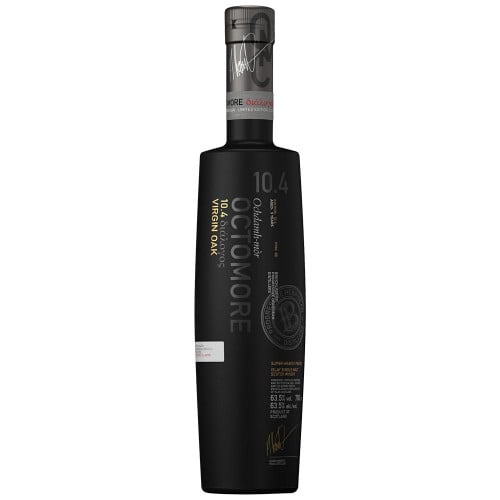 The word Octomore means "the big eighth," it’s a term derived from the medieval division of common ground. The Original Octomore distillery was founded in 1816 by George Montgomery. The original spirit they produced at Octomore would have been heavily peated, and being distilled on the brine-soaked shores of the Loch Indaal, the whisky would have been sold very young.

The 49 tons of barley, grown on the Octomore farm, are germinated over a period of three days. The peat used to dry the barley used in Octomore is sourced from a Caithness Croft, situated in the vastness of Northern Scotland also known as "The Flow Country." An area where peat has been cultivated since the ice age, developing in waterlogged, anaerobic blanket bogs, forming from the partial decomposition of vegetal matter.

Octomore 10.4 is the fourth release in the tenth edition of this heavily peated line from Bruichladdich. Distilled from Scottish barley in 2016, this Octomore 10.4 is the youngest ever released, aged for 3 years in Virgin Oak, and bottled at 88 ppm. Twenty-eight casks cut from Limousin oak have been heavily toasted before making their way to Warehouse 12 for filling. Their high tannic impact is balanced by a high toast level which gives way to a dry fruit character that is incredibly well-rounded.

There is a richness, chocolate, tobacco, bonfire smoke, leather. Vanilla custard, blueberry, dry straw and pear drops. The palate is warming with spicy — mulled wine. Leather and tobacco, malt sugar, icing sugar. All wrapped in earthy peaty smoke. Dry on the palate. The finish is oak driven, with coconut, tobacco, vanilla, then smoke. The time in the cask has calmed the smoke, both through the phenols lowering naturally over time and the influence of the oak becoming greater.