Size750mL Proof119 (59.5% ABV)
One of the world's most heavily peated whiskies, Octomore 7.1 is the last Scotch released by Bruichladdich’s Master Distiller Jim McEwan.
Notify me when this product is back in stock. 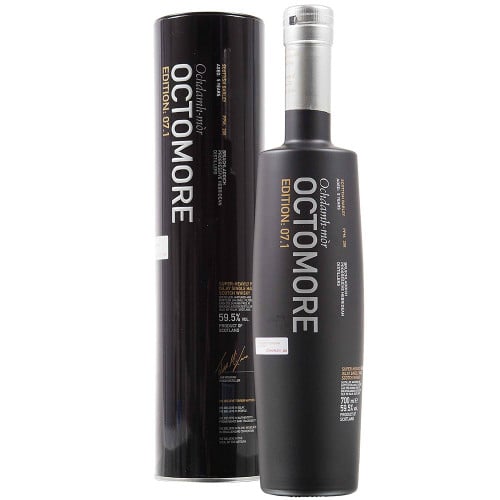 Bruichladdich Octomore 7.1 is the distillery’s final release under Master Distiller Jim McEwan’s tenure. The whisky takes its name from Octomore Farm, a farm situated high above the village of Port Charlotte, just two miles away from Bruichladdich Distillery (the farm provides all of the barley used to create the whisky). Harvested from mainland Scotland, the barley used in this release is then malted before being peated to an absurdly high 208 phenol parts per million, making it one of the peatiest whiskies in the world.

Once the whisky has been distilled, it is matured for five years in American oak before being bottled at 119 proof without the use of chill filtration or artificial coloring. As a result, Bruichladdich Octomore 7.1 has a sandy color, with aromas of sea spray, caramel, lemon peel and tobacco. The palate is filled with bright notes of peach, citrus fruits and honey, and is complemented by heavier notes of chimney smoke and leather. The peat is evident on the finish, with bold flavors coming together for a long, memorable sensation.

“The feeling is of long summer nights turning cooler as autumn approaches. This dram will transport you to Islay, to watch the sun setting over the sea while breathing in the peat smoke hanging in the air,” says McEwan.

Sandy color, with aromas of sea spray, caramel, lemon peel and tobacco. The palate is filled with bright notes of peach, citrus fruits and honey, and is complemented by heavier notes of chimney smoke and leather. The peat is evident on the finish, with bold flavors coming together for a long, memorable sensation.