Be the first to review this product
The Black Art series is shrouded in mystery, as the exact casks used to mature the single malt for 29 years are only known to Head Distiller Adam Hannett. It's an unpeated Islay whisky that was matured exclusively on Islay and was bottled at cask strength.
Add to Wish List
Notify me when this product is back in stock.

The Black Art series is shrouded in mystery, the lack of information a feature. The casks aged are kept a secret that is guarded by Head Distiller Adam Hannett ― in fact, nobody but him knows the exact cask types. This expression is the 9th in the series and Hannett's fifth. Distilled in 1992 and bottled in 2021, it's a 29-year-old unpeated single malt that is bottled without chill-filtration and coloring at cask strength: 88.2 proof. Only 12,000 bottles were produced, each being individually numbered.

Get your bottle of the oldest Black Art release to date!

On the nose, you'll find aromas of tropical fruit, oak spice, pine, honey, orange zest, and hints of tobacco & vanilla. The palate is deep with tobacco, brown sugar, coconut, and plenty of fruit notes. The lengthy whisky finishes with a fruity sweetness with apricot, mango, and banana notes, as well as toasted oak, honey, and vanilla. 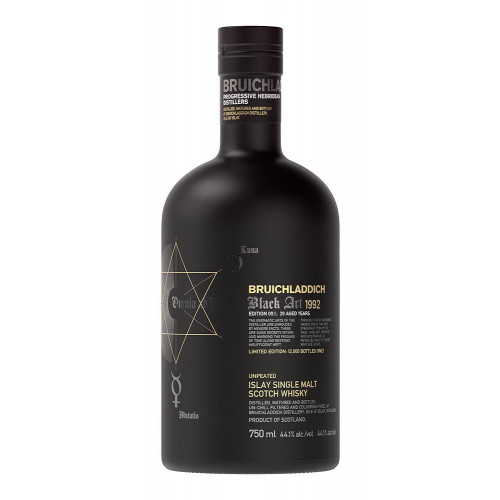