Be the first to review this product
This straight bourbon was distilled in Owensboro, Kentucky, and finished using 80% Central Coast Cabernet barrel staves and 20% new charred French oak staves. It bridges the gap between two states and two worlds ― those of whiskey and wine.
$30.99
Add to Wish List

Infuse Spirits has gone on to develop a wide range of products, including six vodkas and a lineup of unique cocktail bitters under the brand name Infuse Bitters. Then there's Broken Barrel Whiskey. While Infuse Spirits vodkas are flavored with natural spices and fruits, their whiskeys are infused with staves from other barrels of different wood types. Hence the name ― they break the barrels, then put the wood into the whiskey.

Broken Barrel California Oak has 2 states in its DNA, Kentucky and California. The straight bourbon was distilled in the first using a mash bill of 70% corn, 21% rye, and 9% malted barley. It was then finished with 80% Central Coast Cabernet barrel staves and 20% new charred French oak staves. "California Oak was created as a bourbon that could seamlessly bring the wine drinker into the world of whiskey. This is a step into our world and a every day sipping whiskey made to be drank neat, and often," says founder Seth Benhaim. The expression has earned a Gold Medal at the 2020 edition of the San Francisco World Spirits Competition.

It's a delicate balance of wine and new oak staves. There's a sweetness on the palate with dark fruit, cherry, caramel, marshmallow, and a hint of nuttiness. Has plenty of oak notes that linger through the long finish. 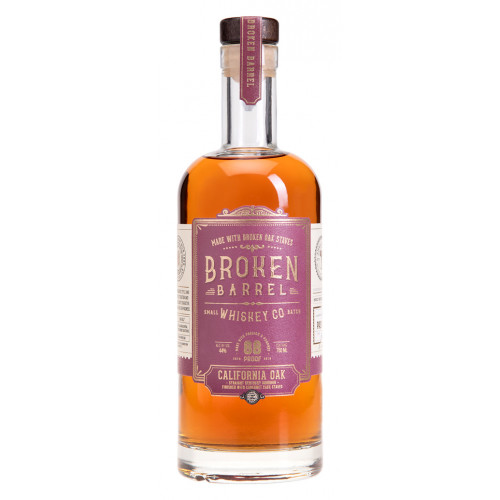