Learn more
Size750mL Proof90 (45% ABV) *Please note that the ABV of this bottle may vary
Made with a recipe of five different botanicals, this gin pays homage to Brooklyn's founding fathers and its do-it-yourself work ethos. 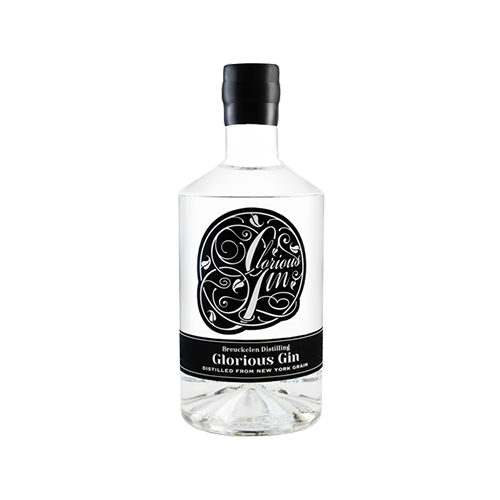 Breuckelen Glorious Gin is made from wheat that Brad Estabrooke, the distillery's owner and master distiller, sources from a farm in upstate New York and then mills at mashes at his distillery. "One of the reasons that we liked gin and that we liked to pick gin as the first product to make was because the legal definition of gin is wide open and we thought we had a lot of flexibility," says Estabrooke. After distilling the grains, Estabrooke infuses the distillate with a secret recipe of five different botanicals, including juniper, lemon, rosemary, ginger and grapefruit. "I distill the wheat spirit with one botanical at a time," Estabrooke says. "Then, I take all those individual botanicals and blend them together in order to make it taste just like we want it to."

As a result, Breuckelen Glorious Gin has an aromatic profile, with bold notes of grapefruit along with a touch of ginger and lemon. As the initial notes of rosemary and warm juniper fade, notes of ginger, sage and lavender compliment a fresh burst of citrus.

"People are really interested and passionate about trying to make something delicious for you — whether it's beer or food or coffee or pickles," says Estabrooke, who credits other industries for making people feel comfortable with trying new brands. "It's a matter of time before they come around with spirits, too. Consumers have come to realize that small, independent producers can do really special things."

Situated along the banks of the Gowanus Bay in Brooklyn, New York, Breuckelen Distilling Co. pays homage to the borough's founding fathers and its do-it-yourself work ethos.
Explore all Breuckelen bottles >>

Bold aroma of grapefruit, with a hint of ginger and lemon. Initial notes of rosemary and juniper fade into notes of ginger, sage and lavender, which are complemented by a burst of fresh citrus.