Size750mL Proof82.4 (41.2% ABV)
Crafted with 7 classic botanicals, this gin is made in the oldest gin distillery in England and is revered for its balance and versatility. It has won a Double Gold Medal at the San Francisco World Spirits Competition among numerous other accolades. 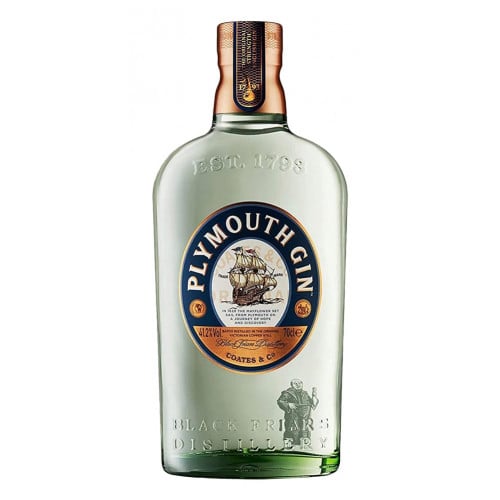 What was once a 15th-century monastic building is now home to the Plymouth Distillery, also known as the Black Friars Distillery, the only remaining distillery in Plymouth, England. The Port of Plymouth was once a "beacon for explorers," an important hub of commerce for maritime traders. Although "Plymouth Gin" is a distinction reserved only for gins that are distilled in Plymouth England, the Plymouth brand is the only brand produced in the area.

The Plymouth Distillery was built in 1431 and was once a Dominican Order (also known as the Black Friars) monastery. Since repurposing and opening their doors as a distilling business in 1793, the distillery has been producing the Plymouth brand under Fox & Williamson (which switched names thereafter to Coates & Co). After changing hands several times, England’s oldest working distillery and its brand are now produced under the colossal Pernod Ricard.

The distillery’s buildings served many purposes throughout the 15th and 16th centuries. After housing a monastery, in 1536 it became the town’s "Marshalsea" (debtor’s prison). It is believed that this location was where the first Non-Conformist meeting took place, also serving as a billet for Huguenot refugees. Later on, it was said to have housed the Pilgrim Fathers during their last night in England in 1620, before they boarded the Mayflower.

Plymouth Gin is crafted with 7 botanicals. Juniper berries are there for the aromas of pine and a touch of bitterness, coriander seeds bring citrusy notes, then there's orange and lemon peels for even more fresh zestiness, while angelica root, green cardamom, and orris root add some menthol, dryness, and sweetness. The precise ratios are a secret, but there's a distinct earthiness, sweetness, and citrus that take the limelight here, making the spirit quite different from its London Dry cousins. The delicious spirit has won numerous awards over the years, including a Double Gold Medal at the San Francisco World spirits Competition.

Grab a bottle of this classic gin today!

Earthy, fresh, and juniper-forward, this gin opens with fresh juniper, coriander, and cardamom on the nose. There's a pleasant sweetness on the palate with an overall smoothness and creaminess to it. Finishes unusually long and fresh with lingering notes.