Size750mL Proof96 (48% ABV)
Showcasing the elegant nature of French terroir in the smell and taste, Brenne 10 Year Old Single Malt Whisky is a new style of French single malt. Released annually in highly-limited quantities of only 300 cases. Gold at the 2021 San Francisco World Spirit Competition.
Notify me when this product is back in stock. 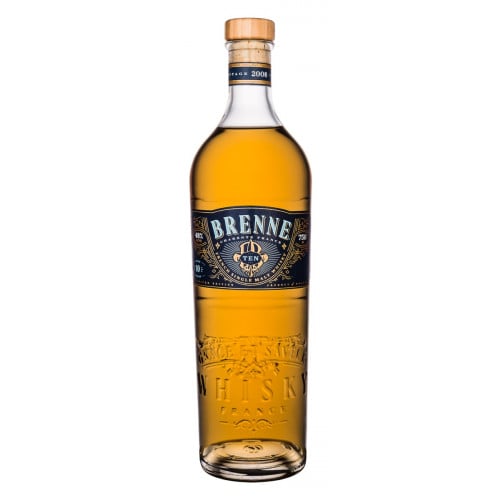 Reflecting the elegant nature of French terroir in the smell and taste, Brenne 10 Year Old Single Malt Whisky is a new style of French single malt that's released annually in highly-limited quantities of only 300 cases.

Made from 100% organic heirloom estate-grown barley from Cognac, France, this is a marriage of about four different hand-picked barrels. Fermented and twice distilled in alembic Charente stills – as opposed to pot stills, traditionally used for single malts – it's cut to proof with water from the Charente River. Brenne is the world's first single malt aged exclusively in a combination of French Limousin oak and Cognac casks. Sharing the DNA of their Estate Cask expression, this sumptuous whisky offers a deeper richness with its creamy and fruit-forward character and notes of dried fruits, black pepper, spices, chili, and dark chocolate. Best enjoyed neat or in a Parisian Highball.

Former ballerina-turned-whisky entrepreneur Allison Parc founded Brenne to show the elegant French terroir – a sense of place in the smell and taste – in an exquisite single malt whisky. Fully certified organic, made with local and non-GMO ingredients, Brenne begins in the mineral-rich fields in the mild microclimate of Cognac, where it’s created in cooperation with a third-generation cognac maker at the family-owned farm distillery that has been producing eau de vie since 1920s. In 2012, Parc distributed the first released bottles herself via Citi Bike in Manhattan, New York. Brenne was soon sold out and today, it's available in all major markets and top bars in the world.

After the elegant nose introduces aromas of dried fruits and melted chocolate, the deep and rich palate offers a creamy and fruit-forward character with notes of dried fruits, black pepper, spices, chili, and dark chocolate. The finish is long and complex.