This product is available in: CA, DC, NJ, ND Unfortunately, we can't ship to PO Boxes and APO addresses.

Size750mL Proof86 (43% ABV)
Made from a marriage of five to seven year old bourbons, this whiskey earned a score of 91 points from Wine Enthusiast.
Notify me when this product is back in stock.

This product is available in: CA, DC, NJ, ND Unfortunately, we can't ship to PO Boxes and APO addresses. 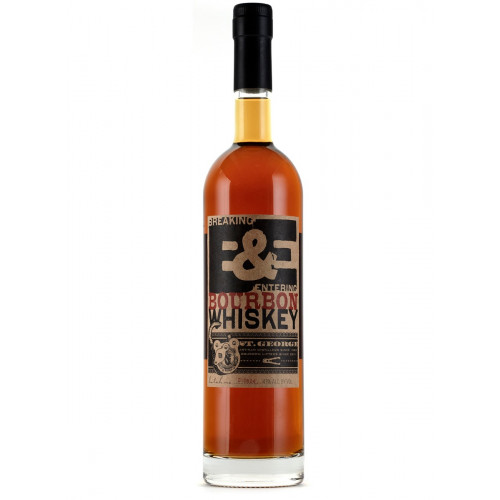 Founded in 1982 by German-born JÃ¶rg Rupf, St. George Spirits is one of the oldest craft distilleries in the United States.  The distillery, housed in an old World War II airplane hangar on a former naval base on the edge of San Francisco, is home to Lance Winters, nuclear engineer, mad scientist and St. George's master distiller, and Dave Smith, St. George's chief blender.

Winters and Smith, who are widely-known for experimenting with different types of spirits, have a laboratory dominated by a 10-liter test still, which sits adjacent to the glass beakers and graduated cylinders that cover every inch of their counterspace. Next to the dusty chalkboards caked with equations for the conversion of sugar to alcohol and intricate diagrams of molecular structures are bottles of experimental whiskies, vodkas and even an aging balsamic vinegar (it's 14 years old already).

After 30 years of producing their own spirits, St. George Spirits has developed a wicked hobby — barrel thieving.  Breaking & Entering Bourbon is the product of Winters and Smith going deep into the rickhouses of Kentucky's most venerable bourbon distilleries and selecting 300-plus barrels of bourbon to bring back to California. After sampling each individual barrel (which took three months alone) and experimenting with different blends, Winters and Smith settled on a recipe made up of 80 different barrels, each ranging in age from five to seven years.  The result is a criminally delicious bourbon with notes of maple, banana, brown sugar and cinnamon.

"We like to think of our spirits as parties in a bottle, and the label is the invitation," says Winters.

Soft aroma with hints of banana, light fruits, rye and a touch of char. Notes of rye and spice open up on the palate, and are well-balanced by hints of dried fruits, figs and dates. Long, delicate finish.