Learn more
Size750mL Proof90 (45% ABV) *Please note that the ABV of this bottle may vary
Handmade in small batches, only eight barrels are chosen for each batch as the best representation of this award-winning bourbon. By replacing rye with wheat in the mash bill, the distillery has produced a whiskey that is pleasantly smooth, with a delicate taste.
Notify me when this product is back in stock. 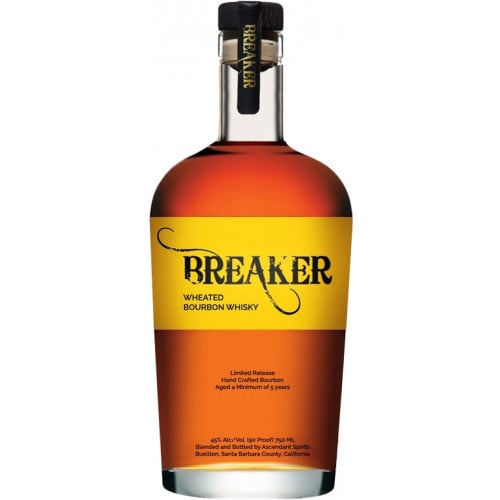 Breaker Wheated Bourbon fills in as a counterpart for the brand's unique bourbon. By replacing rye with wheat in the mash bill, they have produced a whiskey that is pleasantly smooth, with a delicate taste.

Packaged in California, refined in Wyoming. Bottled at 90 proof and aged in new, charred American Oak barrels for 5 years minimum, this wheated whiskey offers dominating flavors of caramel and vanilla on the palate, culminating in a spicy finish with rich oak and pepper notes.

Handmade in small batches, only eight barrels are chosen for each batch as the best representation of this award-winning bourbon.

Make sure you grab a bottle!

"The bourbon offers dominating flavors of caramel and vanilla on the palate, culminating in a spicy finish with rich oak and pepper notes. On the nose Breaker Wheated Bourbon Limited Release impresses with vanilla, honey, a hint of molasses, dark chocolate, and just a whiff of campfire smoke."