Learn more
Size750mL Proof114 (57% ABV) *Please note that the ABV of this bottle may vary
Only 535 bottles of this single malt Scotch whisky, which was aged for over three decades, were ever produced.
Notify me when this product is back in stock. 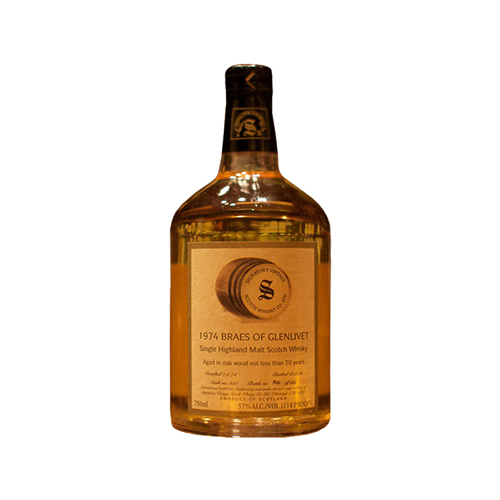 Braes of Glenlivet 30 Year Old Single Malt Scotch Whisky (Signatory Bottling) was one of the first batches of whisky ever distilled at the Braeval Distillery. The whisky was made exclusively from malted barley, which was milled and mashed before being fermented in the distillery's original washbacks. Following fermentation, the wash was distilled twice: first through Braeval's copper-pot wash still and then again through its copper-pot spirit still.

Braes of Glenlivet 30 Year Old Single Malt Scotch Whisky (Signatory Bottling) was distilled on February 7, 1974 and matured for over 11,000 days in a traditional oak cask (Cask #550). On August 13, 2004 — over three decades after its initial distillation — the whisky was bottled at cask strength. The whisky has a golden honey color, along with an aroma of creamy vanilla, tropical fruits and cloves. The aroma gives way to notes of cinnamon, violet, lemon meringue pie and toffee, which ultimately leads to a long, caramel finish with just a touch of spice.

Only 535 bottles of this single malt whisky were ever produced. Pick one up today!