Size750mL Proof103.8 (51.9% ABV)
Bradshaw Kentucky Straight Bourbon Whiskey is blended from the finest grains and aged for a minimum of 2 years in hand-selected barrels. It is bottled at 51.9% ABV as a tribute to Terry Bradshaw's passing completion rate of the same percentage.
Notify me when this product is back in stock. 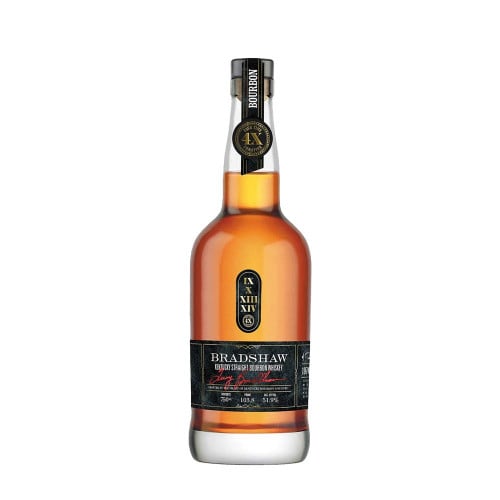 Bradshaw Kentucky Straight Bourbon Whiskey is a carefully crafted collaboration between the NFL legend and Hall of Famer Terry Bradshaw and Silver Screen Bottling Company. Bradshaw, who played for the Pittsburgh Steelers for 14 seasons, is one of the most successful and iconic quarterbacks in the history of the league, and won four Super Bowl victories and two Super Bowl MVP titles. After retiring from football due to a repeated elbow injury, Bradshaw became a sport commentator and analyst, and has been the co-host of Fox NFL Sunday since the show’s inception in 1994. Always striving for excellence, Bradshaw has won three Sports Emmy Awards for his work in broadcasting. He also appeared in several TV shows and in movies. In 2001, he became the first NFL player to receive a star on the Hollywood Walk of Fame. Throughout his career in sports and later entertainment, Bradshaw has also undertaken several business initiatives, with bourbon being the latest of his endeavors.

Bradshaw Bourbon, produced in collaboration with the Silver Screen Bottling Company, is distilled by a third-generation master distiller on the site of one of the first distilleries in Kentucky, which was issued the state’s 10th distillery license in 1885 (DSP-KY-10). Despite major disruptions, such as a devastating fire in 1918, ownership changes, prohibition, and bankruptcies, the distillery in Owensboro has been making bourbon and rye for nearly 130 years, and has produced several storied Kentucky Bourbon brands. The distillery, now owned by Terressentia Corporation, recently returned to its original name – Green River Distilling Co, and is a proud partner to some of the fastest-growing spirits brands in the world. Under the watch of third generation Master Distiller Jacob Call, the distillery continues the tradition of producing fine bourbon and rye using only locally sourced Kentucky grown corn and oak char barrels.

Bradshaw Kentucky Straight Bourbon Whiskey is blended from the finest grains and aged for a minimum of 2 years in hand-selected barrels. It is bottled at 51.9% ABV as a tribute to Terry Bradshaw's passing completion rate of the same percentage.

Vanilla, toffee, banana, leather, and campfire notes on the nose open up to a palate with flavors of cinnamon, baking spices, vanilla and coconut. The vanilla notes carry on through the finish, accompanied by wood and butterscotch.