$36.99
Caskers Rewards members earn up to 1 store points back when buying this bottle.

Size750mL Proof94 (47% ABV)
Made from a unique blend of botanicals, this gin is matured for six months in barrels that were previously used to age Kentucky bourbon.
Notify me when this product is back in stock. 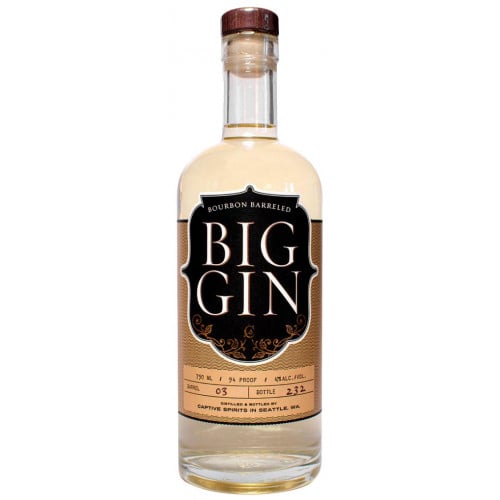 "Big Gin is the fruition of copious test batches," says Ben Capdevielle, the founder and master distiller at Captive Spirits (Capdevielle is a third-generation distiller). "We tested different botanicals, techniques and equipment in order to find the perfect recipe. Ultimately, we concluded that test batch #27 was the old-world, dry gin that we had been searching for. "Infused with a blend of nine different botanicals (juniper, coriander, bitter orange peel, grains of paradise, angelica, cassia, cardamon, orris and Tasmanian pepper berry) and distilled through a 100-gallon Vendome copper pot still, the gin has a bold aroma of pine and black pepper, with touches of orange, lemon and juniper on the palate. The gin earned the Silver Medal at the San Francisco World Spirits Competition in 2013.

Captive Spirits' Bourbon Barreled Big Gin is made using Capdevielle's traditional gin, but is matured for six months in barrels that were previously used to age Kentucky bourbon. As a result, it has a more complex and rounded flavor profile, with pronounced notes of oak and spices and a subtle citrusy undertone. Bourbon Barreled Big Gin also earned the Silver Medal at the San Francisco World Spirits Competition in 2013.

Try an exciting twist on a traditional gin today!

Complex and rounded flavor profile, with pronounced notes of oak and spices and a subtle citrusy undertone.