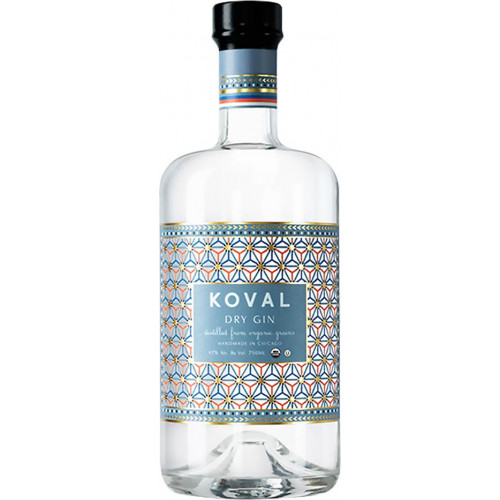 In the Gin industry, the commonplace practice is to purchase ready made bottled spirits to produce a distillate. At Koval they do things differently, making all of they’re gins from scratch, using pure organic ingredients. Their innovative signature style uses only the heart of the distillate, which is believed to offer a brighter, cleaner spirit. Koval is a grain to glass operation, each step of their organic production process is meticulously monitored.

First Koval contracts local farmers to grow grain that is to be milled and mashed on-site. Next the resultant liquid is distilled, bottled and packaged on-site. Koval, meaning “blacksmith,” in numerous European languages, or “black sheep” in Yiddish, is one of America’s premier small batch, independent spirit manufacturers.

This special gin is comprised of unique woodland spices. Juniper, and wildflower are very prominent on the nose. On the palate are dry and vibrant notes of clean fresh cut grass, citrus, and white pepper, with a round, floral body. It won a Double Gold Medal at the 2015 San Francisco World Spirits Competition, Best in Show at the 2015 Los Angeles International Spirits Competition, and a Gold Medal at the 2015 Spirits Prestige International (SIP) Awards.

Pick up a bottle of this organic dry gin today!

Made with a unique variety of woodland spices. Juniper and wildflowers envelop the nose, while the taste is dry, yet vibrant - clean and nuanced by emerald grasses, golden citrus, and white pepper with a round, floral body. Crisp enough to enjoy straight and of course excellent in cocktails both classic and contemporary.