Size750mL Proof84 (42% ABV)
This award-winning Boom Boom Bourbon is a Ringside brand, created in collaboration with both Cleveland Whiskey & world champion Ray Boom Boom Mancini.
Notify me when this product is back in stock. 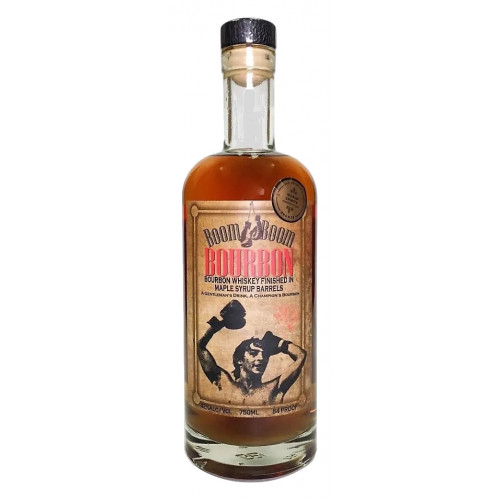 Raymond Michael Mancini, best known as “Boom Boom” Mancini, is a former professional boxer who is now an actor and sports commentator. Raymond, who was inducted into the International Boxing Hall of Fame, inherited his nickname from his father, boxer Lenny Mancini.

Known for his street-tough charisma, his career reached an all-time high in 1982 when he won the WBA Lightweight Championship title by defeating Arturo Frias. Ray’s professional boxing career as dynamic as it was entertaining. Mancini discovered his love of “maple barrel bourbon” after sampling it from a Cleveland distillery.

Pressure changes cause the alcohol to move through the porous of the maple-syrup-infused wood, delivering a smooth complex spirit. This unique bourbon earned third place—Bronze—at the San Francisco World Spirits Competition in 2019.

Notes of toasted oak, vanilla, spice, burnt caramel, a hint of maple syrup, butterscotch, is followed by a subtle smokiness.