Size750mL Proof125.3 (62.65% ABV
This big & bold bourbon pays tribute to Booker Noe's good friend Mike Donohoe who played an important part in the creation of the brand. Aged 6 years and 11 months and bottled at 125.3 proof, it's an exceptionally well-balanced expression and a great start of the year 2021 for Booker's.
Notify me when this product is back in stock. 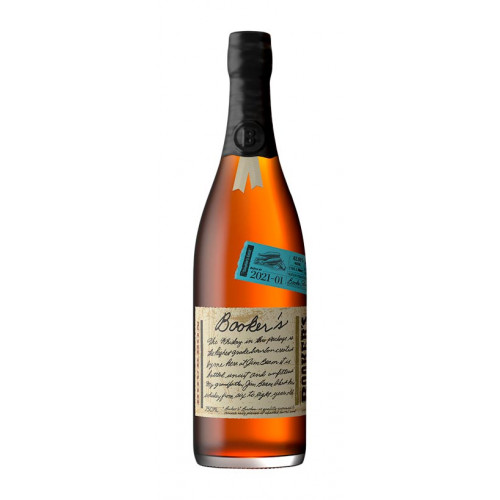 Each year sees a few batches of Booker's uncut and unfiltered bourbon released, each batch meticulously aged to perfection ― it's ready when it's ready. The first batch of 2021 is the Donohoe's Batch, named after Mike Donohoe, a retired Jim Beam Employee and a close friend of Booker Noe. It was Donohoe that came up with the idea of gifting Booker's own bourbon to important partners and distributors ― the idea that led to the creation of the brand. The 125.3-proof whiskey is aged 6 years and 11 months and is exceptionally balanced ― a fitting tribute to the man without whom "Booker’s Bourbon wouldn’t exist today." Full-bodied with notes of vanilla, baking spices, and an immensely satisfying finish, it's the epitome of what makes Booker's big and bold bourbons so well-regarded.

The medium amber bourbon has vanilla, caramel, and baking spices on the nose along with a touch of smoke. It's full-bodied with deep vanilla, nuts, and oak on the palate along with a pleasant sweetness. The finish is satisfyingly long with oak and spice notes lingering.