Caskers Rewards members earn up to 9 store points back when buying this bottle.
Size750mL Proof128 (64% ABV)
Named in honor of Booker Noe’s affection for fishing bluegills, this limited-edition bourbon — the fourth release in Booker’s 2016 Batch Collection — is a blend of barrels aged a minimum of six years and five months, and is bottled at 128 proof!
Notify me when this product is back in stock. 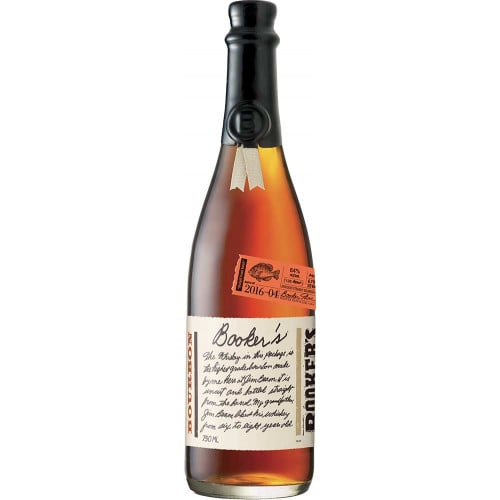 Booker's Bluegill Creek Bourbon Whiskey is named in honor of Booker Noe, the grandson of Jim Beam, and his affection for fishing bluegills. “It was unseasonably warm even by Kentucky standards on the day that I selected the barrels for this batch,” said his son, 7th generation Master Distiller Fred Noe, “and it brought me back to the hot summers that my dad and I spent together fishing for bluegill.” It is the fourth release in Booker’s 2016 Batch Collection.

Made from a mash of primarily corn, Bluegill Creek is carefully crafted using barrels from four different rickhouses and five separate production dates. The bourbon is matured in virgin American oak casks in Kentucky, where the temperature and humidity are the most favorable for maturing whiskey, for a minimum of 6 years, 5 months and 28 days.

As a result, Bluegill Creek is anchored by vanilla throughout, like other batches in the Booker’s line. It has a smoky-sweet aroma of light brown sugar, sweet corn, and baking spices, followed by a palate of popcorn, caramel, cinnamon, as well as hints of oak and peanut oil — though it’s a bit less nutty than previous releases. The finish is long, warm, and just sweet enough.

Bluegill Creek is anchored by vanilla throughout, like other batches in the Booker’s line. It has a smoky-sweet aroma of light brown sugar, sweet corn, and baking spices, followed by a palate of popcorn, caramel, cinnamon, as well as hints of oak and peanut oil--though it’s a bit less nutty than previous releases. The finish is long, warm, and just sweet enough.