Learn more
Size750mL Proof86 (43% ABV)
This whiskey, which is aged for a minimum of two-and-a-half years, is crafted in the traditional Pennsylvania rye style by the oldest historic distillery in the United States.
Notify me when this product is back in stock. 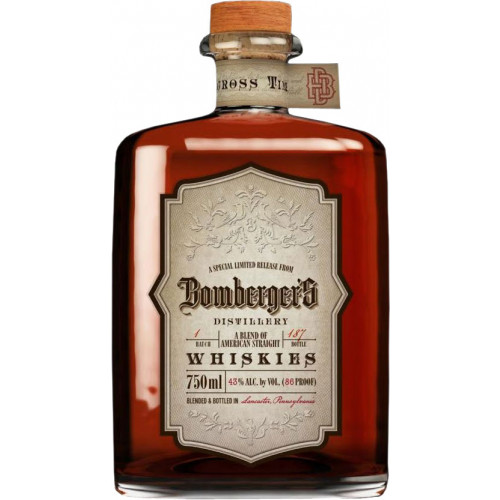 Bomberger's Blended Whiskey is crafted in the traditional Pennsylvania rye style, which is known for being sweeter and more robust than whiskies made elsewhere. The whiskey, which is blended from a high-rye bourbon and McKenzie Rye Whiskey (from Finger Lakes Distilling Co.), is aged for a minimum of two-and-a-half years.

The whiskey has beautiful aromas of candied orange and cherry, which lead to vanilla, caramel and baking spices on the palate. The whiskey finishes with hints of oak and citrus, enhanced by subtle tones of tobacco and leather.

Pick up a historic whiskey today!

The Bomberger's Distillery legacy can be traced back to 1753, when two Swiss Mennonite farmers by the name of John and Michael Shenk began distilling rye whiskey on their farm near Lancaster County, Pennsylvania. The distillery was passed down through relatives of the Shenk family until 1860 when the distillery was purchased (and subsequently renamed) by Pennsylvania Dutchman Adam Bomberger, who owned and operated the distillery until Prohibition forced its closing in 1919. At that time, Bomberger's Distillery was the oldest operating distillery in the United States, and in many ways represented the transformation of whiskey distilling from an agricultural enterprise to a large-scale industrial one.

Today, Bomberger Distillery is recognized as a national landmark and is undergoing a whiskey-making renaissance thanks to the stewardship of Dick Stoll, Bomberger's master distiller. Trained by Everett Beam himself, Stoll is the former master distiller of Pennsylvania Michter's, where he created the famed A.H. Hirsch Bourbon. Eric Wolfe, a business partner, involved in the revitalization of the Bomberger's brand, has said of Stoll, who is now in his 80s, "He knows so many things from doing this for decades, that he doesn't even know what he knows."
Explore all Bomberger's bottles >>

Aromas of candied orange and cherry, which lead to vanilla, caramel and baking spices on the palate. Finishes with hints of oak and citrus, enhanced by subtle tones of tobacco and leather.