Learn more
Size750mL Proof82 (41% ABV) *Please note that the ABV of this bottle may vary
This expression takes its inspiration from the landscapes surrounding the Laverstoke Mill distillery. It builds on the classic Bombay Sapphire recipe, adding 3 botanicals to the original 10: pennyroyal mint, rosehip, and toasted hazelnut. 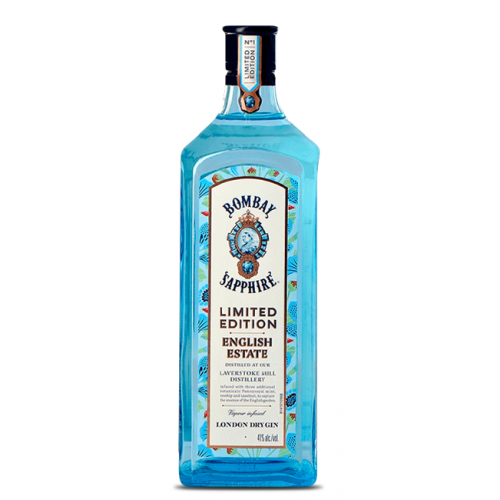 Released in 2019, the Limited Edition Bombay Sapphire English Estate Gin builds on that foundation of 10 botanicals and vapor infusion with an additional 3 botanicals: pennyroyal mint, rosehip, and toasted hazelnut. This brings a distinct nuttiness and floral notes to the profile, while still retaining the original's character and perfect balance. Light and refreshing, this 82-proof expression was crafted to be enjoyed in various summer cocktails, taking its inspiration from the landscape that surrounds the Laverstoke Mill distillery.

Laverstoke Mill is as a historic building as they come, with the earliest written record of a mill at the location dating back to 1086. Having been owned by William the Conqueror and Henry VIII, the site has seen 4 royal visits in its rich history. In 1719 the mill was leased by printer Henry Portal and used for the manufacture of banknotes throughout the reign of Queen Victoria. During this time, several expansions were carried out in order to increase production. It was in 2010 that Bombay Spirits Company purchased Laverstoke Mill, opening the distillery doors to the public in 2014.
Explore all Bombay Sapphire bottles >>

It's a vibrant and floral gin with citrus, mint, pine, and a distinct nuttiness on the nose. Juniper is on the palate along with additional nutty and floral notes as well as a touch of spice. Finishes floral with hints of peppery spice.