Size750mL Proof75 (37.5% ABV)
Crafted with freshly harvested blackberries and raspberries, this 75-proof flavored gin relies on natural ingredients for its bold fruity profile. No sugar or artificial flavors are added, making for a deliciously berried flavor that is perfect for summer days.
Notify me when this product is back in stock. 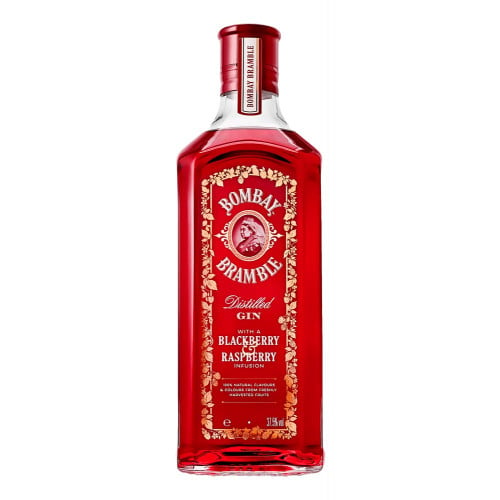 Bombay Bramble was added to the range in 2020 after much experimentation. "Launching a flavour expression was always going to take time as it’s important that the taste experience comes purely from natural botanicals and ingredients," says Tonutti. "Master distiller Dr. Anne Brock and I worked closely and carefully to infuse our gin with an exclusive maceration of berries that have been harvested at their ripest moment." With no sugar added, it has a natural, rich, and bold berry flavor that is perfect for summer days. Named after the classic cocktail, the 75-proof gin is exceptional at adding a fruity touch to a gin & tonic.

The beautiful ruby-red gin has vibrant fruity aromas of berries, jam, and spice. There's a pleasant natural sweetness on the palate with plenty of fresh berry notes, juniper, and a touch of spice and earthiness. Finishes with lingering berry notes.