Size750mL Proof117.4 (58.7% ABV)
A collaboration between Metallica and late Master Distiller Dave Pickerell, dedicated to the Golden State. This is a stunning marriage of the finest bourbons, ryes, and whiskeys.
Notify me when this product is back in stock. 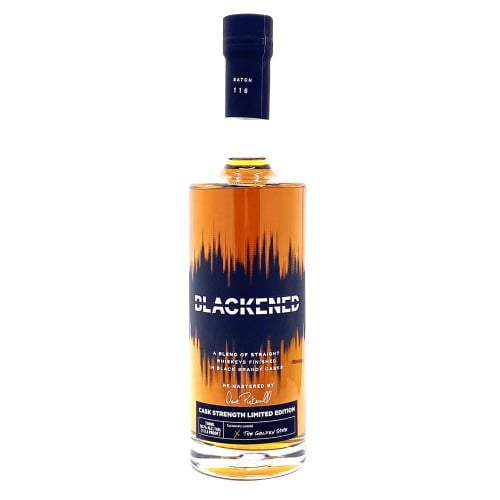 Born out of a collaboration between the heavy metal band Metallica and the late Master Distiller Dave Pickerell, Blackened "The Golden State" Cask Strength Limited Edition is a special release, dedicated to California. Married and finished in black brandy casks and bottled at cask strength of 58.7% ABV, this is a marriage of the finest bourbons, ryes, and whiskeys that has been subdued to a special subwoofer that would transfer vibrations of Metallica tracks through the casks. They dubbed this proprietary process BLACK NOISE. The process is intense, but the flavor builds delicately with honey, cinnamon, allspice, clove, and mint. Expect a long, slighlty creamy, and exceptionally smooth finish with maple and honey notes.

Both masters in their respective fields, Metallica, the heavy metal band, and the late Master Distiller Dave Pickerell, considered the founding father of craft distilling, joined forces and presented to the world Blackened whiskey. Sharing their creative fire, they crafted an unconventional whiskey, made with a process like no other. Dave Pickerell was interested in how sound could affect substances on a molecular level.

Teaming up with Metallica and their long-time collaborators ― the innovating sound-engineering wizards Meyer Sound ― they created They dubbed this proprietary process Black Noise, trademarked it, then proceeded to play tracks by Metallica ― chosen specifically for each batch by the band themselves ― to the whiskey.

A warm, honey-amber hue. The nose opens up with burnt caramel, honey, oak, and a hint of spice. The palate delights with flavors of honey, cinnamon, allpicfe, mint, and clove with apricot in the background. The finish is long, smooth, and slightly creamy.