Learn more
Size750mL Proof109 (54.5% ABV) *Please note that the ABV of this bottle may vary
A limited-edition blend of rums from Jamaica, Barbados, Guyana, and Trinidad to commemorate the 50th anniversary of Black Tot Day. Only 5,000 bottles released.
Notify me when this product is back in stock. 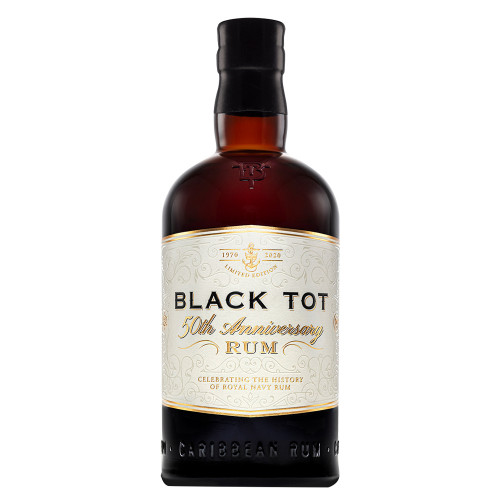 Celebrating the 50th anniversay of Black Tot Day – the day when the last tot was distributed to Royal Navy sailors -- Black Tot 50th Anniversary Rum honors the original blend and marries the lost rums of the past with the finest modern rums of the present. A blend of rums from Jamaica, Barbados, Guyana, and Trinidad, it's bottled at navy strength. Comprised of rums from demolished distilleries and the remnants of the historic Navy Rum, this one-of-a-kind blend boasts an unparalleled balance of rums, delighting with flavors of licorice, vanilla, lime juice, dark chocolate, and dried mint on the sweet and full-bodied palate. Only 5,000 bottles of this commemorative limited-edition blend were released.

Based on a recipe by Black Tot's Head Blender Oliver Chilton, Black Tot Finest Caribbean Rum is a blend of the world's finest rums, coming together in a new and unique style. It’s inspired by a Royal Navy tradition, according to which tots of rum were administered to the sailors from the 1600s and until 1970. Bottled at 46.2% ABV, each individual flavor is allowed to shine individually. Bringing together rich flavors of Barbados, Guyana and Jamaica, expect tropical notes balanced by flavors of coffee and chocolate. Tropically aged, non-chill filtered and non-sweetened, this splendid rum should be sipped neat or enjoyed in premium rum-forward cocktails.

Founded by Sukhinder Singh, Black Tot was inspired by a Royal Navy tradition that started in the 1600s and lasted until 1970. During that period, a tot of rum was distributed daily to the sailors, instilling them with the neccessary courage to fight battles. Singh tracked down and sampled examples of original blends of Caribbean Rums from collectors and had them analyzed. This is how the story Black Tot was born. Singh modeled their flagship rum after the original navy dram, honoring the historic drink and creating a new, modern spirit.

The nose greets with cinnamon, nutmeg, caramel, apple tart, and citrus. The palate boasts an unparalleled balance, delighting with flavors of licorice, vanilla, lime juice, dark chocolate, dried mint, and a touch of nuttiness. The finish is long and lingering with mint chocolate, licorice, and cream.