Learn more
Size750mL Proof86 (43% ABV) *Please note that the ABV of this bottle may vary
This small-batch rye-whiskey is aged in charred white oak casks and due to a blend of two mash bills produces smooth drinking rye that has already been awarded Silver at San Francisco World Spirits Competition and 89 points from the 2020 Ultimate Spirits Competition
Notify me when this product is back in stock. 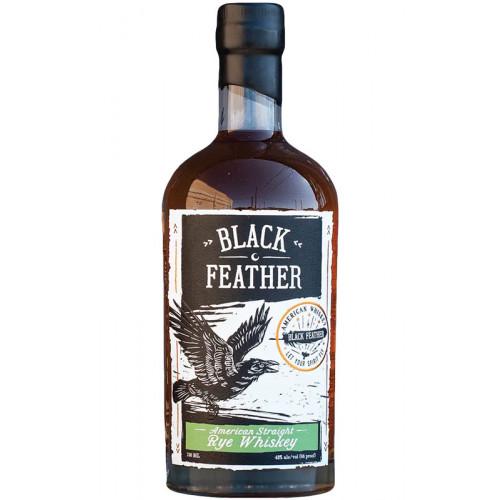 Black Feather American Straight Rye Whiskey is smooth drinking rye
made from a bond of two mash bills. The first one is high rye mash consisting of 95% rye and 5% malted barley while the other one balance things out with 51% rye, 45% corn, and 4% malted barley which makes

Black Feather American Straight Rye Whiskey is an 86-proof straight rye whiskey that offers complexity and smoothness. Notes of cinnamon, nutmeg, and vanilla are found in the nose, while hints of spice and honey are present on the palate. The finish is medium length and balanced.

Black Feather American Straight Rye Whiskey is a straight rye whiskey that offers complexity and smoothness. Notes of cinnamon, nutmeg, and vanilla are found in the nose, while hints of spice and honey are present on the palate. The finish is medium length and balanced.