Size750mL Proof90 (40% ABV)
Aged for up to two years, this wheat whiskey is made in homage to the founder of the American Distilling Institute.
Notify me when this product is back in stock. 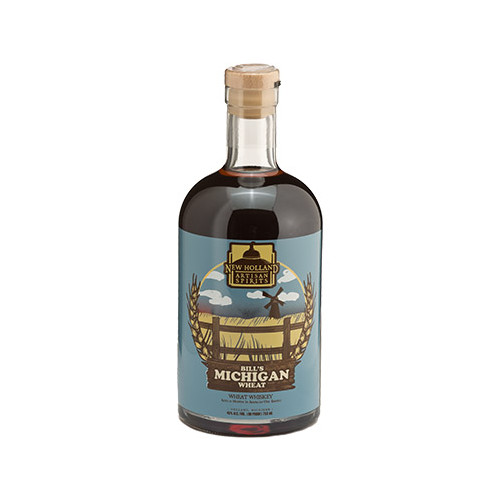 After the whiskey has matured for up to two years, each batch is non-chill filtered and bottled by hand. The whiskey has a warming aroma of cloves, cinnamon and spices. Soft notes of honey, vanilla beans and caramel on the palate are layered against notes of spicy oak and allspice. The finish is smooth and lean, with a warming touch.

"The craft beer movement has sparked a real curiosity in average beer drinkers, who say to themselves that they don't need to drink the same product anymore," says VanderKamp. "We want to do the same thing with whiskey drinkers."

The American Distilling Institute was founded by Bill Owens in 2003 to promote the burgeoning craft spirits movement. At the time, only 69 craft distilleries dotted the American landscape from sea to shining sea. Today, over 400 craft distilleries produce authentic spirits that are testaments to the master distillers who make them by hand.

Bill's Michigan Wheat Whiskey is made in homage to Bill Owens, who helped countless craft distilleries get off the ground. "I drive across the country and back meeting distillers, to see what's going on with them and to promote them," says the 75 year-old Owens. "I really love the guys who have distilling in their DNA — they wake up one day and they want to do it. They have to do it."

Bill's Michigan Wheat Whiskey is made by New Holland Distillery exclusively from wheat and two-row malted barley grown and malted in Michigan. Once the grains have been malted, they are milled and mashed with a proprietary strain of yeast before being twice distilled through New Holland's copper pot stills. Following distillation, the whiskey is matured 5, 10 and 15 gallon American oak barrels with a heavy char. "The heavy char contributes strong notes of vanilla, caramel and oak tannins to our whiskey," says Brett VanderKamp, New Holland Distillery's master distiller.
Explore all Bill's Michigan bottles >>

Warming aroma of cloves, cinnamon and spices. Soft notes of honey, vanilla beans and caramel on the palate are layered against notes of spicy oak and allspice. Finish is smooth and lean, with a warming touch.