Size750mL Proof91 (45.5% ABV)
Aged for four years in American oak casks, this bourbon is finished for an additional six months in zinfandel casks.
Notify me when this product is back in stock. 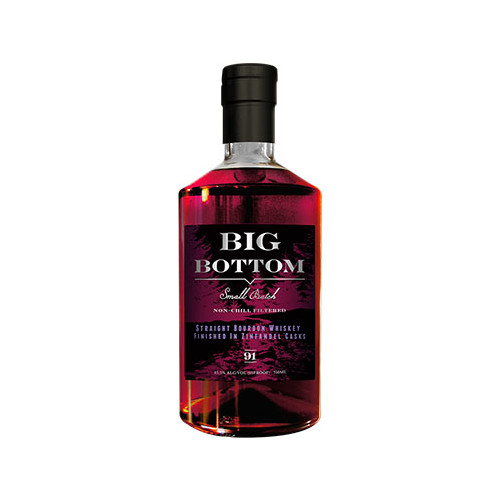 Big Bottom Straight Bourbon Whiskey Zinfandel Cask Finish is made from a mash of 60% corn, 36% rye and 4% malted barley. After distillation, the bourbon is aged for just over four years in new, American white oak casks. These casks contribute traditional notes of caramel, honey and cinnamon to the whiskey. Following its initial beauty rest, the bourbon is double-barreled, or finished, in French oak zinfandel barrels. The zinfandel barrels, which are sourced from four different Napa Valley vineyards, were previously used to mature zinfandel that came from vines that were between 70 and 135 years old.

After a six-month beauty rest in the wine casks, Pappas — looking for the perfect balance of sweetness and spice — personally blends the barrels together using only his tastebuds as a guide. "For the Zin Finish, I want to add a bit of sweetness to compliment the vanilla and caramel notes of the bourbon. I'm looking for a marriage made in heaven and once I find it, I know it." After blending the barrels, Pappas brings each batch of the non-chill filtered bourbon to 91 proof — a tribute to his classmates at The Citadel, the South Carolina military college from which Pappas graduated in 1991. After the bourbon is brought to proof, a crew of volunteers fill and cork each bottle by hand.

Big Bottom Straight Bourbon Whiskey Zinfandel Cask Finish has notes of honey and vanilla, which are complemented by a burst of citrus and caramel. The bourbon earned the Gold Medal at The Fifty Best Tasting Competition in 2013.

"At four years old, it shows above its age," says Ted Pappas, the founder and Chief Bootlegger at Big Bottom Whiskey, referring to his bourbon. Inspired by the burgeoning craft spirits movement, Pappas, together with a group of friends, decided to open the doors to Big Bottom Whiskey over a game of poker. Their distillery — situated in a nondescript warehouse just twenty miles from Portland, Oregon — is named in honor a protected wilderness preserve located at the foothills of Mount Hood.
Explore all Big Bottom bottles >>