This product is available in: KY, MN, WA Unfortunately, we can't ship to PO Boxes and APO addresses.

Size750mL Proof92 (46% ABV)
This 17-year-old gets its name from the Latin word for 17. It’s complex, with just a hint of peat smoke and delicious notes of apple pie, cinnamon, and nutmeg.
Notify me when this product is back in stock.

This product is available in: KY, MN, WA Unfortunately, we can't ship to PO Boxes and APO addresses. 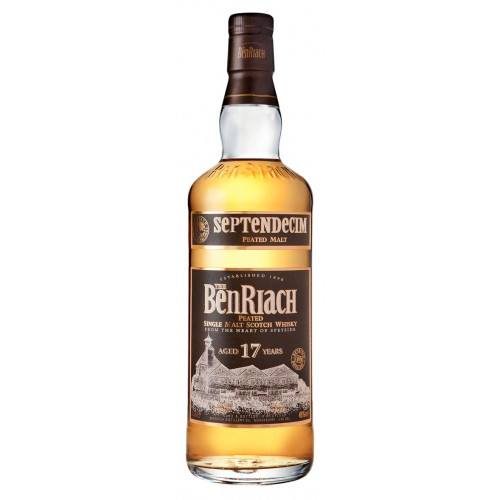 But the 1960s were good to BenRiach as well as the entire industry, and the facility remained operational from 1965 onwards. In 2004 the distillery was bought out by a private entity who released a true BenRiach single malt whisky. The distillery eventually fell under the ownership of The BenRiach Distilling Co. which also took (befittingly) the Glendronach and Glenglassaugh distilleries under its umbrella.

From BenRiach's peated range this Septendecim expression gets its name from the Latin word for seventeen. This beautiful 17-year-old whisky is bottled at 46% abv. Septendecim is complex, with a hint of peat smoke and delicious notes of apple pie, cinnamon, and nutmeg.

The nose has notes of apple and peach, with heavy notes of cinnamon, nutmeg and fruit sweetness. There is a light, but distinguished touch of peat, and a trace of wood. The flavor features cinnamon, nutmeg, fruit pie, oak wood, and peat smoke. The finish is warming with an aftertaste of spice.