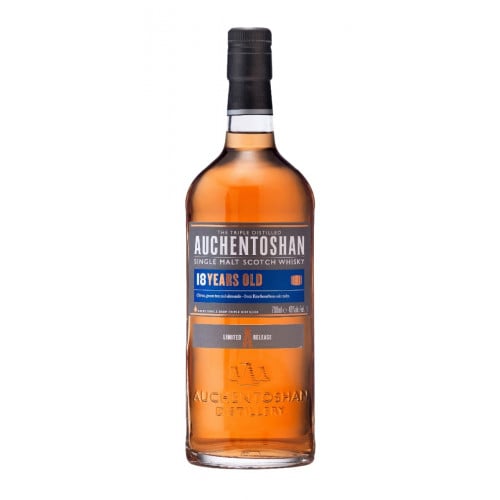 Auchentoshan 18YO Single Malt Scotch Whisky is made from malted, optic barley that is gently kilned and completely unpeated. The barley is milled and mashed before being fermented in wooden washbacks made from Oregon Pine. The wooden washbacks (as opposed to the stainless steel washbacks used at most distilleries) retain a portion of the heat produced during fermentation, and ultimately produce a lighter and slightly sweeter Whisky.

Following fermentation, the Whisky is distilled. While Scotch Whisky is traditionally distilled twice, Auchentoshan Single Malt Scotch is distilled three times — first through a wash still, then through an intermediate still, and finally, through a spirit still. This extra step during distillation — no other major distillery uses an intermediate still — is both time-consuming and expensive, but it produces a 160-proof Whisky that is incredibly pure and free of impurities.

Following the third distillation, the Whisky is brought down to barrel proof before being matured for 18 years in used bourbon casks. Before Auchentoshan fills the used casks, however, the interiors of the barrels are set on fire, or re-charred, for up to a minute, opening up the grains and caramelizing the remaining sugars. As it matures, the Whisky picks up an aroma of tobacco and old leather, along with hints of toasted almonds and green tea. The initial flavors are deep and slightly woody, with notes of zesty citrus, ripe fruits and a hint of sweet, brown sugar. The finish, which is long and lingering, is well-balanced with notes of spicy cinnamon and oak.

Triple distilled and aged for 18 years, this scotch earned a score of 90-95 points from Wine Enthusiast.

Pick up a bottle of Scotch (whose name no one can pronounce) today!

Aroma of tobacco and old, chewy leather. Initial palate is sweet and robust, with notes of zesty citrus, ripe fruit and brown sugar. The long, lingering finish is well-balanced with notes of cinnamon and oak.