Learn more
Size750mL Proof90.4 (45.2% ABV) *Please note that the ABV of this bottle may vary
Aged for nine years before being finished in Sherry Oloroso casks imported from Spain, this bourbon won Double Gold at the 2015 San Francisco World Spirits Competition.
Notify me when this product is back in stock. 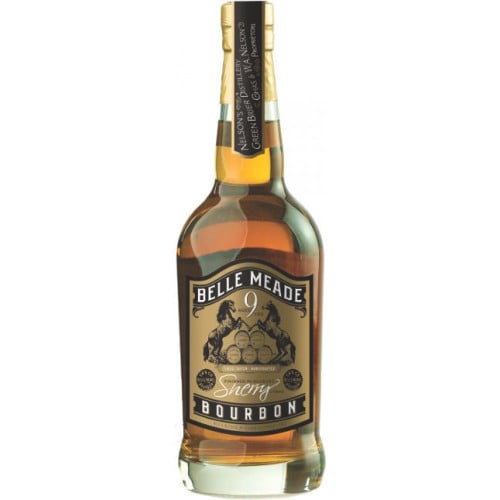 Belle Meade Bourbon is made from a mashbill of 64% corn, 30% rye, and 6% malted barley. Once the grains are milled and mashed, they are fermented with two unique strains of yeast. “I think the two yeast strains really work well together to create that balanced flavor,” says Andy, “not going too heavy or too light on any single characteristic.” Following fermentation, the bourbon is distilled and matured in new, American oak casks.

Belle Meade 9 Year Old Sherry Cask Finished Bourbon is hand-picked by Charlie and Andy from their distillery’s reserve stock, and is aged at least nine years before being finished in Oloroso Sherry casks (imported from Spain) until the perfect flavor is reached. As a result, the bourbon has an aroma of sherry wine, oak staves and tulips, which leads to a full-bodied palate lush with caramel, cracked corn, raisins and dried figs. The finish is smooth and creamy, with notes plum, vanilla bean and molasses.

Each bottle of Belle Meade Bourbon is adorned with a vintage label that includes the portrait of two horses whose origins can be traced back to the original Belle Meade Plantation in Nashville. The horse on the right, known as Bonnie Scotland, was one of Belle Meade's leading sires and was an ancestor to Man O' War, Seabiscuit and Secretariat. The horse on the left, who was known as Brown Dick, was the descendent of a horse simply named Whiskey. “He's the reason we removed their names from the label,” says Andy, pointing to the horse on the left.

Aroma of sherry wine, oak staves and tulips, which leads to a full-bodied palate lush with caramel, cracked corn, raisins and dried figs. The finish is smooth and creamy, with notes plum, vanilla bean and molasses.