Caskers Rewards members earn up to 3 store points back when buying this bottle.
Size750mL Proof110 (55% ABV)
This exclusive Beast Masters Club pick is a private barrel, chosen from the sixth floor of second generation Wild Turkey Master Distiller Eddie Russell’s oldest rickhouse; Warehouse G.
Notify me when this product is back in stock. 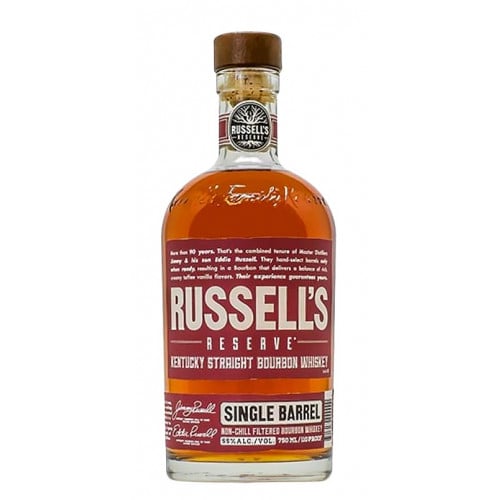 This Beast Masters Club pick is a private barrel of Russell's Reserve, chosen from second generation Wild Turkey Master Distiller Eddie Russell’s oldest rickhouse. Built in 1890, Warehouse G’s most optimal maturation conditions tend to be in the winter time, and this barrel was distilled on New Year’s Eve, 2007.

The special barrel was also aged at quite an elevation, being matured on the sixth out of seven floors in the warehouse stack. Featuring impressive notes of wood, spice, and vanilla, Russell's Reserve showcases boldness rather than sweetness. This private selection is “A true beast of a bourbon…” the well-known Beastly connoisseur crew affectionately naming the barrel the “Hot Pickle.”

“Don’t worry, “Hot Pickle” doesn’t refer to the taste, it was our favorite late night snack after a long day of barrel-picking. “Hot pickle!” became the rallying cry of our small but determined bourbon task force as we drank our way across the Bluegrass State. We decided that from all the whiskey we tasted, this barrel would have the honor of being dubbed, The Hot Pickle!” (Beast Masters) Bottled at 110 Proof, this private single barrel exclusive is a release you won't want to miss.

The nose is full of char, oak, big vanilla, and spice with little hints of fruits, nuts, and chocolate. The first sip gives way to a super oily palate, and a long warm finish full of pipe tobacco, barbecue sauce and wood.